Virgin rainforest perched among the clouds. Day passes as twilight beneath the forests' thick canopy, while tree frogs serenade anyone will listen.

The Guguerro Greendeep is a location on Tswarra, Isle of the Lost from Lemurés in Final Fantasy XII: Revenant Wings.

The Galbana sustained heavy damage when the Judge of Wings destroyed the skysea, but managed to make landfall on a deserted island. However, the island may not be deserted after all...

In order to win this battle, the player must escort the wounded man encountered at the beginning of the jungle path all the way to the map's northwest corner, which is marked by several Maiden's Cap fungi. 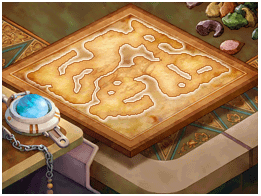 Tomaj isn't above groveling when he locates a rare material he's been dying to get hold of in the Guguerro Greendeep. He must have his reasons...

This is a Scavenging mission; the player must mine the stone material node at the north end of the map to win.