Majestic waterfall set as the heart of the Greendeep. The water's misty spray refreshes and revitalizes, but the direct force of the cascade can be crushing.

The Gugoza Falls are a location on Tswarra, Isle of the Lost from Lemurés in Final Fantasy XII: Revenant Wings.

The man the party rescued from the Yarhi remains silent, winning no friends save Penelo. Vaan, having none of it, strikes out to find food.

The object of this mission is to collect the fruits of two Prickly Plum bushes, with only Vaan and Kytes available as the player's party. A whole hoard of Malboro will constantly spawn, hindering this process. 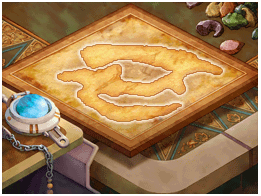 Legend tells of a sword protruding from the back of a plodding beast, and the stoneturtle at Gugoza Falls certainly matches the description. What other treasures wait beneath the falls?

The Great Tortoise, Aspidochelon, will slowly but surely make its way up the winding path around the falls, though a large number of monsters. Once it reaches the end, it will turn around and head back. The player only needs to defeat Aspidochelon to claim victory.

Mission 68: Destiny in the Stars[]

Stars rain from the sky near Gugoza Falls, as frightened sky pirates attempt to find meaning in the ominous omen. Whispers grow of a scion who plots to bring down the heavens and destroy the world below.

This is a battle against Exodus, who waits at the topmost point the the waterfall trail. After the Scion's defeat, Fran gains her Quickening, Gaze of the Void.