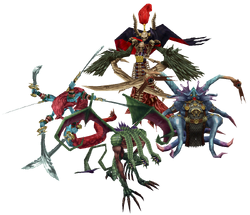 We meet again... I am one of the Chaos guardians. Kneel before my power!

Zidane's party learns from Hildagarde Fabool that the man they pursue, Kuja, hails from another world: a world called Terra. To open the portal there, the party must place an elemental mirror in each elemental shrine. The party splits into four teams of two to tackle all four shrines simultaneously.

After Kuja has decided to destroy the world, he recreates the four guardians from the memories of the crystal in Memoria to try and kill Zidane and his friends as they track him down. Crystalline versions of the Chaos guardians appear in the Crystal World.

The Earth Guardian is the only one of the four shrine guardians to be fought as a boss, while the other three are killed off-screen. Only Kraken goes unseen prior to entering Memoria.

The guardians of Terra—Maliris, Tiamat, Kraken, and Lich—are fought in Memoria, and much like in the original Final Fantasy, their fights are triggered by passing otherwise unmarked areas in the dungeon. Crystal palette swaps of the four are fought in the Crystal World, the final area.

Data hacking shows that there are many gaps in the numerical sequence of battle formations and monster IDs, showing that many battle formations and monsters were deleted prior to the final version. In addition to many more, three missing monster IDs appear around the "Earth Guardian", making one suspect that in the original version the player was to fight all four of the shrine guardians instead of only one. Design artwork for these other three guardians is known, as well as deleted locations, which would probably have been where they were fought.

The guardians' theme is "Guardians" (それぞれの戦い, Sorezore no Tatakai?, lit. Everyone's Battle), which plays during the battles against them in the Four Elemental Shrines. 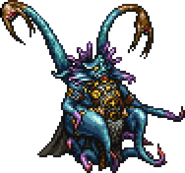 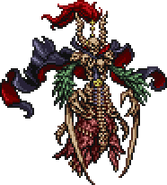 The Four Fiends is a recurring concept in the Final Fantasy series as four demonic enemies that serve the game's main antagonist and are fought as bosses. They are often associated with the four elemental forces—Earth, Fire, Water, and Wind, and can be seen as counterbalances to the four elemental Crystals, as the Four Fiends often seek to subvert the influence the Crystals have on the world. The Four Fiends are referred to as the Four Chaoses (四つのカオス, Yottsu no kaosu?) in the Japanese version, and the Guardians of Terra also call themselves "Chaos guardians". 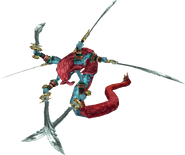 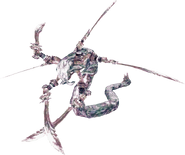 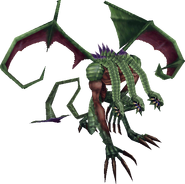 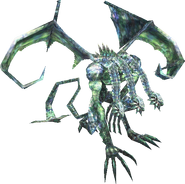 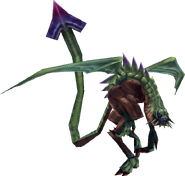 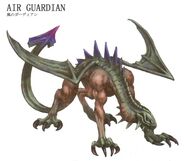