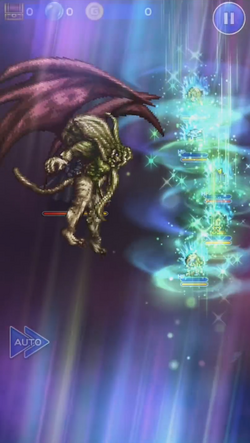 Guardian Mog (モグのおまもり, Mogu no Omamori?, lit. Mog's Amulet) is a recurring ability in Final Fantasy series. It generally removes status ailments from a character after the battle, and is commonly associated with Eiko Carol.

The Guardian Mog is a support ability exclusive to Eiko that can be learned from Ribbon or Madain's Ring for 30 AP. It removes status ailments before EXP and AP are given at the end of battle, and thus the player doesn't need to cure Eiko of Virus if she gets afflicted during battle, but has Guardian Mog equipped. Even though Eiko can learn the ability early, it does not function until the party receives the first Ribbon item.

Guardian Mog is an Ultra Soul Break exclusive to Eiko that can be mastered for 30,000 EXP from Lamia's Flute (IX). It instantly restores a large amount of HP to all allies, and grants them Last Stand and Haste .

Eiko (6★, level 1) gets a variant called Friendship with Mog (モグとの友情, Mogu to no Yūjō?) that in addition to removing all status ailments from her after a battle, also boosts her status ailment resistances by 70%.