The Guardian is a boss exclusive to Final Fantasy V Advance. It is fought in the area right before Enuo in the Lethe Court section of the Sealed Temple.

The Guardian will be invincible and immobile until both of its Launchers are taken down. The moment it becomes vulnerable, it will act by casting Delta Attack and possibly casting Encircle, complicating the battle more than it should. It is adviced to take it down before that happens.

It is without a doubt the easiest boss in the Sealed Temple. It is similar to the Soul Cannon battle. The party should summon Bahamut to kill the Launchers and the Wave Cannon, before unleashing Rapid Fire against the Guardian. This battle is nothing compared to Omega Mk.II and Neo Shinryu, as Guardian should fall within three to four turns. 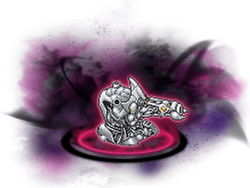 Retrieved from "https://finalfantasy.fandom.com/wiki/Guardian_(Final_Fantasy_V)?oldid=3249679"
Community content is available under CC-BY-SA unless otherwise noted.