This Guardian weapon protects both wielder and the wielder's charge. Increases physical and magic resistance when health is low.

Guardian's Edge (ガーディアンエッジ, Gādian Ejji?, lit. Guardian Edge) is a recurring weapon in the series. It is a weapon used primarily by Noel Kreiss.

Guardian's Edge can be found via the Archylte Steppe, and offers both base strength and magic by 40. Its synth abilities are both Critical: Shield II and High HP: Power Surge, allowing Noel's defenses to increase a notable amount when he is near death.

Aesthetically, the weapon is colored rather vividly-wild with colors that both allude to Caius and Yeul. Colors involved are teal-green, violet-purple, light tan, white and yellow. Throughout the weapon's design, an engraved image of a daisy (another allusion to Yeul) can be seen on: 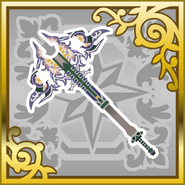 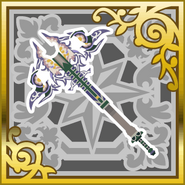