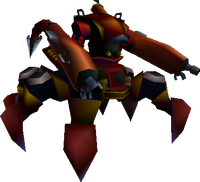 Cloud and Barret fight Guard Scorpion at Mako Reactor 1 in reactor's Core. A misleading battle message has Cloud tell the player to attack Guard Scorpion while its tail is raised, but doing so will always cause it to use Tail Laser, a counter-attack which deals large damage to the entire party. This is its only strong attack.

Guard Scorpion is a boss and enemy in Crisis Core -Final Fantasy VII-. It is a boss in Junon while Zack Fair is pursuing Dr. Hollander. In certain missions, Guard Scorpion is also available to fight as a regular enemy. It still displays the iconic attacks Target Search and Tail Laser, but the Crisis Core re-creation is stronger than the original version, although with an almost identical appearance.

Guard Scorpion is an enemy that appeared in the first trailer of the game, shown at E3 2014.

Guard Scorpion (25th) is exclusive to FFVII 25th Anniversary Collab. It is a boss and Blanket Orders will be issued when it spawns. It resists everything but Thunder and uses the same abilities it used in Final Fantasy VII.

The Scorpion Sentinel from Final Fantasy VII Remake also appears as a boss with the same weakness A special field spawns around it, making combat between candidates outside and inside impossible.

The Magitek Scorpion is the first boss in the Ala Mhigo instance. The enemy's appearance and attacks are based on its original appearance in Final Fantasy VII. The enemy is called the Guard Scorpion in the Japanese version.

In the final dungeon of the Stormblood expansion, Ghimlyt Dark, the Schola Scorpion appears as an enemy, which is a weaker version of the Ala Mhigo boss.

Vajra is based on the Guard Scorpion. It is a boss the party faces in Ingram, the capital of Milites. It is a scorpion-like MA that pursues the cadets throughout the abandoned streets of the metropolis, able to climb on buildings.

Keep a close eye on Guard Scorpion's tail, kupo! Attack when his tail is raised and he'll strike back with his deadly Tail Laser!

Guard Scorpion appears as the boss of Mako Reactor No. 1 in Final Fantasy Record Keeper.

The game goes out of its way to make sure Tyro's first fight is a no-lose battle. The player is once again warned to avoid attacks while the tail is up--the counterattack will send Tyro into critical status, and if that should happen (it does happen no matter what),the player will be advised to call upon Cloud, which will end the fight. In future encounters, patience is the key. Hit it while its defenses are down with Thunder spells and timed strikes. White Mage and Black Mage are added to the roster on a successful first pass.

The Scorpion Sentinel appears in game as part of the collaboration with Final Fantasy VII Remake. The Scorpion is featured as the event's enemy boss as well as a summonable Vision Card and Esper. As a Vision Card, Scorpion Sentinel boosts AoE Resistance, Critical Damage, Slash Attack and Water Resistance of equipped Lightning units, as well as boost ATK, Critical Hit Rate to Lightning units in the same party and Slash Resistance if the card is at Max Lvl. 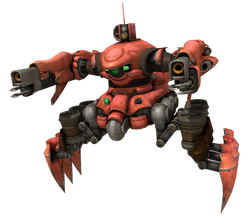 Guard Scorpion appears as a boss in the Eclipse Contact crossover event with Final Fantasy VII Remake and a Light-elemental ability card obtained as a lucky draw from the event.