Military canines trained by troopers from Shinra's Public Security Division. They are extremely obedient once trained, and can sniff out intruders and launch ferocious attacks when ordered.

The Guard Dog is an enemy in Final Fantasy VII Remake. They are beasts employed by Shinra Public Security Division, often accompanied by Security Officers.

Guard Dog (Vanguard) is also a grounded unit in the Fort Condor minigame in Episode INTERmission that only attacks the opponent's headquarters.

Use magic attacks to rapidly fill their stagger gauge.

The Guard Dog is an agile beast that can tackle its opponents, as well as perform a three-hit physical attack, with the first attack stronger than the succeeding ones. It can lunge at the player, who may be caught off guard if the enemy is out of camera shot. The Guard Dog can perform a powerful spinning whip attack with its head tentacle called

Whirlwhip, which can knock opponents away. Lastly, it can attack with

Throat Clamp, where it lunges at its opponent, knocking them down and locking with their jaws, binding the target on the ground and preventing them from moving.

Special interactions are programmed between the dogs, their handlers, and the party. The human handlers will express dismay if their dog is taken down before they are, with Cloud having lines to respond that they're next.

On the hard difficulty, the Guard Dog is overall more aggressive and is harder to flinch.

Much like the vast majority of biological-type enemies, the Guard Dog is weak against

Ice. Since they don't boast high stats, they are relatively easy to dispatch, but can be dangerous in large numbers.

As the Guard Dog's actions are easily interrupted, it is recommended to immediately attack them. Blocking is recommended against its consecutive attacks. Cloud can also retaliate by using his counter-attack while in Punisher Mode.

Should one of the party members get bind by Throat Clamp, it is recommended to either mash buttons to escape faster, or to switch characters and attack the Dog Hound with powerful attacks. Throat Clamp cannot be countered by Punisher Mode.

Guard Dog pounces on Cloud Strife during a cutscene. 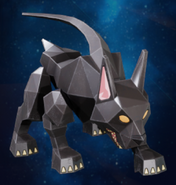