Guard (まもる/守る? or まもり, Mamori?, lit. "Guard" or "Defense"), also known as Defend or Defense, is a recurring ability in the Final Fantasy series. The ability is often associated with the Knight job, greatly increasing the defenses for the user when used. In some games, the ability often serves as a Knight variation of the Paladin's Cover ability.

Defend is a command ability exclusive to the Knight class, which replaces Guard, reduces incoming damage against the user, and intercepts attacks against allies with critically low HP.

The damage taken is equal to the following in the 3D version:

The formula is different in the NES version, which is:

Guard is a command ability learned by the Knight job at level 2 for 30 ABP. It nullifies all physical damage done to the user and is especially useful in conjunction with the Cover ability.

Guard is an enemy ability used by Cid Raines, PSICOM Raider, and Sanctum Archangel. It is a support ability that reduces the damage taken while guarding.

Raises weapon def. and magic res. for one turn.

Defend is the action command of the Defender, a bangaa job class. It makes the user nearly impervious to enemy attacks, especially physical strikes, and includes moves like Expert Guard, which neutralizes all damage done for one turn, and Tremor, which pushes away all nearby units while dealing damage. The Paladin, a hume job class, can also use the ability Defense, which increases the units' weapon and magic resistance until the unit next moves.

Defend is an ability the Paladin and Defender. It increases the unit's Defense and Resistance until the next turn. Defend can be learned from the Lionheart for 200 AP. The Moogle Knight class has an ability with the same effect called Moogle Guard.

There is also a stronger version, called Bulwark, available to the Defender and Raptor, which nullifies all damage dealt to the unit by one turn.

Until next turn, nullifies all physical attacks used against self.

Guard is the level 9 ability for the Paladin class, requiring 250 AP to learn. At the cost of 10 MP, the user will nullify all physical attacks used on them until their next turn.

Parry halves all damage for one round, allies and monsters alike can use this command. 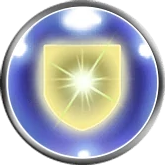