Cid Pollendina: Oh, shut up and help me remodel the Guadosalam page!
Please expand this article into a full one. The following tasks need to be completed:

Summoners usually just pass through on their way elsewhere.

Guadosalam /gwadosə'ɫam/ is the city of the Guado where the gateway to the Farplane is situated in Final Fantasy X and Final Fantasy X-2. The city sits on the path from the north bank of the Moonflow and the southern trail of the Thunder Plains. It comprises three levels with the exits at the bottommost points, the path to the Farplane on the upper level, and the Palace—residence of the current leader—at the center. The city is inside an underground cavern where the walls and walkways are the twisted roots of the trees of the Moonflow's north bank and the city resembles an underground swamp.

Yuna and her guardians pass through Guadosalam on their pilgrimage and are invited to meet with Maester Seymour Guado who has taken an interest in the young summoner. After showing the group a magical sphere projection of the ancient Zanarkand and Lady Yunalesca, he proposes to Yuna.

Yuna heads to the Farplane to speak with the images of her parents and make her decision. The party accompanies her to speak with their own deceased loved ones, and Tidus and Yuna share a moment when she urges him to conjure an image of his mother, bringing up resentment towards his father Jecht.

Upon exiting the Farplane the former Guado Maester, Lord Jyscal, emerges through the gate and drops a sphere at Yuna's feet. She takes the sphere and sends Jyscal back to the Farplane. Yuna enters the Palace to deliver her decision to Seymour while the rest wait outside and contemplate what would happen if Yuna accepted the proposal. After learning Seymour has left for the temple at Lake Macalania, the group heads toward the Thunder Plains.

After the party escapes from Bevelle, they're unable to return to Guadosalam and the lands south of it until they gain access to the airship, due to their involvement in Seymour's death and Yevon branding them traitors. If the party returns to the city, they discover that the Guado have fallen into despair over the revelations about Seymour's true nature and the deaths of most of the younger Guado in battle against the Al Bhed and the party. The Guado are so devastated by this that they do little but await their end at the hands of Sin.

Following Sin's defeat, the Eternal Calm was not a happy time for the Guado. The remaining Ronso sought vengeance for the crimes committed by Maester Seymour on their race and, fearing their retribution, the Guado fled Guadosalam and took refuge in the Macalania Woods. The city lay empty for a time until the Leblanc Syndicate made it their base of operations, with Leblanc turning the Palace into her personal chateau which is kept heavily guarded. Tobli, an aspiring stage producer, has office space in the city as well.

After acquiring uniforms to disguise themselves as members of the Leblanc Syndicate, Yuna, Rikku and Paine infiltrate Chateau Leblanc to retrieve a stolen sphere fragment. Shinra installs a CommSphere at Guadosalam where the Gullwings can view the city from their airship. If Yuna defeats Garik, the Guado return to Guadosalam with Tromell, Seymour's former butler, along with the musicians of the Macalania Woods. Tromell becomes the new leader of the Guado.

The Guado Mansion home to the leaders of Guadosalam during the events of Final Fantasy X. In Final Fantasy X-2, the Leblanc Syndicate take over with Leblanc living in the mansion.

An underworld below the surface, it is a gathering place for the dead.

Once an inn, it has since become a hub for data collecting in Final Fantasy X-2.

Watching Kimahri leave the item shop will increase his affection value by six.

When the player returns to Guadosalam later on in the game, but before defeating Ginnem's Yojimbo in the Cavern of the Stolen Fayth, speaking with Lulu in the Farplane will boost her affection value by eight.

After defeating Ginnem's Yojimbo in the Cavern of the Stolen Fayth, speaking to Lulu in the Farplane will further increase her affection value by eight.

As in every other location, when the party is spread out, the one Tidus talks to first gains affection points.

Note: This mini quest can serve as the answer to O'aka's debt before Chapter 3.

Use the hints provided to hunt down the person in Guadosalam who's out for some data! Press

to trick... er, talk your target into making the purchase! But be quick - no one wants old news!

The Leblanc Syndicate may have stolen the Gullwings's hard-earned sphere, but you're going to sneak into Chateau Leblanc and steal it right back! Locate the Syndicate members deployed across Spira and relieve them of their clothing.

Nobody steals from the Gullwings! Break into Chateau Leblanc and take back what is rightfully yours!

Tromell's pretty busy holding Guadosalam together now that he's leader. Hope he takes it easy now and then, too.

The Guado have returned from their exile, inspired by the song the musicians were playing. Tromell takes leadership of the Guado after some convincing by the Gullwings and some musicians.

To get Episode Complete in Guadosalam the player must complete the following:

There's no word from the Guado --- not even a little! Where could they have disappeared to?

The streets of Guadosalam are quiet, with not a Guado in sight. Leblanc is absent as well, and her goons await their boss' arrival.

In Final Fantasy X-2, the theme that plays in the town is again called "Guadosalam" on the Final Fantasy X-2 Original Soundtrack. "Kuon - The Troupe Performs" plays if the player achieves an Episode Complete in Chapter 5. 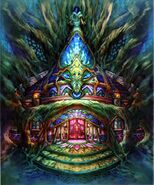 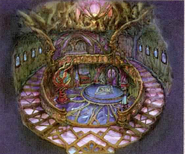 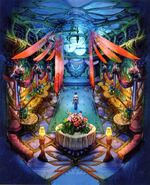 Path to the Farplane artwork.

Gate to the Farplane artwork.

[view · edit · purge]Guado is the Italian word for the English "ford". In Italian Guado is also an alternative name for the Isatis tinctoria, a flowering plant.

[view · edit · purge]Salam (سلام) is the Arabic word for "Peace". Its synonymous meaning in Indonesian and Malay language, Salam means "to greet" and "to shake one's hand upon meeting".