Guado Guardian
The Guado are a humanoid race in Final Fantasy X and Final Fantasy X-2. A race that lives amongst trees, they are the protectors of Spira's afterlife, the Farplane, and the Macalania Woods. The Guado's capital city is Guadosalam, from within which they guard the entrance to the Farplane.

The Guado are wooden and elvish in appearance with long limbs, oversized hands with claw like nails, prominent veins on their faces, and hair resembling flora. Due to their role of overseeing and protecting the Farplane in Guadosalam, they are astute in determining unsent from regular people by their scent. Of all the races in Spira, the Guado are physically the fastest, able to run twice as fast as humans. Their high speed makes the Guado Glories an effective blitzball team.

Unlike other races in Spira, Guado do not seem to leave behind bodies when dead, in the case of the Guado Guardian. However, that may be because of battle convenience. Also, the Guado tend to keep their problems to themselves as seen in cases of Jyscal Guado's sphere from Final Fantasy X, and when Tromell asks Yuna to forget about them in Final Fantasy X-2.

Guado have a religious culture, which causes them to come across as arrogant. Their role as guardians of the Farplane have led to them looking down upon other races. The Guado were converted to the Yevon religion under their leader, Jyscal Guado, who was later appointed a Maester of Yevon. Despite their strict religious culture, they are generous and welcoming to guests. 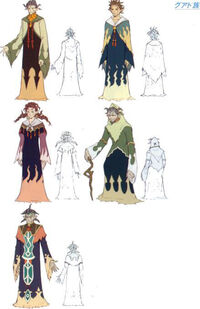 Twenty-eight years ago Jyscal Guado had a child with a human woman in an attempt to foster friendship between the Guado and human races. Their child, Seymour, was viewed as an abomination by the humans, and Jyscal's decision to wed a human led to disunity in the Guado tribe. Three years later, Jyscal became the Guado leader and introduced them to the teachings of Yevon. When Seymour was eight years old, to avoid further strife among the Guado nation, Jyscal had his wife and son exiled to the remote island of Baaj.

Two years later when Seymour was ten he and his mother embarked to Zanarkand to defeat Sin, as Seymour's mother knew she would soon die and feared her son would have no place to belong to in Spira, hoping that giving him the chance to defeat Sin would win Seymour acceptance. Seymour's mother knew of the mechanics of the Final Summoning through Jyscal, as the Guado possess their own records that tell of Spira's sealed histories in fragments. Jyscal was aware of Seymour and his mother going to the Zanarkand Ruins, and privately supported it. When his mother sacrificed herself to become his Final Aeon as Anima, Seymour was horrified and broke off the pilgrimage and returned to Baaj.

With the arrival of Braska's Calm, the Guado's internal discord subsided, and Seymour's exile was revoked. He returned to Guadosalam and assisted his father as a priest. The childhood of rejection and loneliness had made Seymour nihilistic, and he developed a plan to become Sin and destroy Spira, killing all its inhabitants and "releasing" them from the suffering of existence. As the first stage of his plan, Seymour secretly murdered his father and took his place as leader of the Guado and a Maester of Yevon. Using his status as their leader, Seymour uses the Guado and has them discover and attack Home, a safe haven and retreat of the Al Bhed in Bikanel in an attempt to capture Yuna, succeeding and forcing the Al Bhed to destroy the city. Later, Seymour all but reduces the Ronso race to extinction, brutally slaying all who blocked his ascent of Mt. Gagazet.

In Final Fantasy X-2, the remaining Ronso seek vengeance for the crimes committed by Seymour on their race. Fearing their retribution by association, the Guado flee their home and take refuge in the Macalania Woods. The Guado take responsibility for their role in Seymour's crimes, and become content to die with the forest for their sins. If the player makes the right choices during interactions with the Guado, Tromell becomes the official leader of the Guado and succeeds in restoring friendly relations with the rest of Spira. If Yuna's party does not make the right choices, Yuna will be told the Guado had been killed by the Ronso, having not done anything to save themselves.

Guado Guardians are fought in Macalania Temple and Lake Macalania. They can summon fiends to fight alongside them. 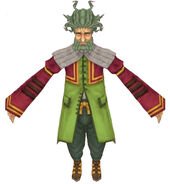 The name "Guado" may be inspired from the Guede. [view · edit · purge]Guade is from the Voodoo tradition; these spirits represent death and are said to be intermediaries between life in death. This is similar to how the Guado guard the Farplane.

[view · edit · purge]Guado is the Italian word for the English "ford". In Italian Guado is also an alternative name for the Isatis tinctoria, a flowering plant. This may allude to Guado's physical features, especially the blue of their hair, as indigo dyes are extracted from the plant.