Final Fantasy Wiki
Register
Don't have an account?
Sign In
Advertisement
in: Final Fantasy Tactics A2: Grimoire of the Rift

Grimoire of the Rift 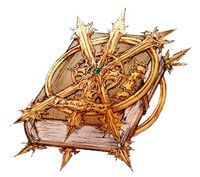 Do as you will. Meet those you will. Live life, for life lived is the source of the book's power.

While cleaning up the school library, Luso finds an old book containing pictures of wizards and swords. Halfway through it ends with the words "One is fated to fill these barren pages. Know you his name?" Luso writes his own name and is transported to the world of Ivalice losing track of the Grimoire during the transition.

After joining Clan Gully, Luso finds the book in his possession. The contents have changed to detail his discovery of the book, the battle with Klesta, and joining the clan. It fills itself out as he completes story missions. Luso seeks out the sage Lezaford, who explains the book's nature. By gaining experiences for the journal to record, Luso increases its power. Once the journal is filled, it will be able to return him to his own world. Luso is delighted since it offers him a way home while still allowing him to have adventures with his clan.

At the Ruins of Delgantua, Illua displays a grimoire of her own and recognizes Luso's as the titular Grimoire of the Rift. She tries to destroy it and it warps the clan to Zellea, temporarily leaving Luso's hands. Lezaford returns it, as the power infused into it by Luso has made it impossible to destroy through physical means. Cid deduces that Illua wants to use the Grimoire of the Rift to access the power between the rifts. Cid and Lezaford both say that Luso's grimoire chose him.

When the journal is nearly full, Illua issues an "invitation" to Clan Gully. With her own completed grimoire and having forged a pact with the God of Time, she transports them all to Zellea. After the party kills her in battle, the grimoires summon the entity Neukhia through the rift to threaten Ivalice, but Clan Gully destroys it.

After the battle, Luso fills out the final pages. The grimoire returns him to his home after he says goodbye to his friends. Later, the grimoire's place on the library table has been taken by the journal Luso was assigned as homework.

[view · edit · purge]A grimoire is a textbook of magic. Such books typically include instructions on how to create magical objects like talismans and amulets, how to perform magical spells, charms and divination and also how to summon or invoke supernatural entities such as angels, spirits, and demons.

Final Fantasy Tactics A2: Grimoire of the Rift setting
Community content is available under CC-BY-SA unless otherwise noted.
Advertisement