Bob Joles
Grimoire Valentine is a minor character in Dirge of Cerberus -Final Fantasy VII-. He is a scientist and the late father of Vincent Valentine.

In a manner similar to his son, Vincent, Grimoire had a tall, imposing figure. He had pale skin, jet-black hair and crimson eyes, noted by Lucrecia Crescent as being like those of his son.

In Lucrecia's flashbacks, Grimoire had a calm demeanor. He was patient and more restrained than his assistant, wanting to avoid rushing into the unknown in the face of new discoveries. He was selfless, willing to protect Lucrecia in a lab accident, and calmly accepting the consequences of doing so. He cared for his son, and asked Lucrecia to pass on his last wishes to Vincent.

Grimoire worked on the discovery of Chaos and Omega with Lucrecia Crescent, who was his assistant. He found a Cetran tablet, which spoke of Omega and Chaos, and wrote the first Omega Reports. He located the grotto where Chaos was destined to awaken, alongside Lucrecia. He was killed when an experiment during his research went wrong and he shielded Lucrecia from the blast.

The Omega Reports, written by Grimoire and Lucrecia, reveal the extent of their research of Chaos and Omega. Dr. Valentine discovered the spring where Omega was to be born. Report number 6, written by Lucrecia, says "The doctor believes the crystalline spring contains contaminated deposits of bioplasma that have overflown from the pure Lifestream". The Omega reports mention the Protomateria, a one-of-a-kind materia found in the Crystal Cavern, supposedly created by dark Lifestream.

Having been part of the events that led to Grimoire's death made Lucrecia feel guilty, and she distanced herself from Vincent. During the discovery of Chaos and Omega, Grimoire and his team had stumbled upon a stagnation of Lifestream onsite. Scientists put it into children about to be born, but did not know how it was going to turn out; even though they did hundreds of experiments, only one was successful: Nero the Sable.

Not much is known of the relationship Grimoire had with his son, Vincent, but Grimoire's last words to Lucrecia were, "Tell my son, that I'm... sorry." 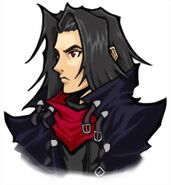 A young Grimoire's portrait in Before Crisis -Final Fantasy VII-.

[view · edit · purge]A grimoire is a textbook of magic. Such books typically include instructions on how to create magical objects like talismans and amulets, how to perform magical spells, charms and divination and also how to summon or invoke supernatural entities such as angels, spirits, and demons.

[view · edit · purge]"Valentine" is a primarily masculine given name derived from the Roman family name Valentinus, which was derived from the Latin word valens, which means "strong and healthy". Saint Valentine was also a third-century Roman saint, commemorated in western Christianity on February 14.