The Grim Reaper (死神, Shinigami?)[1] is a recurring motif in the Final Fantasy series. A psychopomp and personification of death, its appearance differs in every installment, but shares a distinct similarity: a reaper is summoned whenever someone uses the spells Death or Doom, more frequently the former.

The Grim Reaper in its first appearance is summoned through the spell Death (called RUB in the NES version and Reaper in the Origins version). A skeletal figure wearing a red cape beckons the target's soul and slices it down with its scythe. Or, if using another spell, it throws back its cloak, and four skulls emerge, attach to the soul, and fly upwards.

Multiple Grim Reapers appear during the spell animation for Curse. They are skeletal blue-hooded floating figures with scythes.

The Black Magic spells Doom and Death summon the Grim Reaper upon the target. The Reaper appears shrouded in black, has a skull with red eyes, and carries a dark scythe. In the Final Fantasy IV: The Complete Collection, the Reaper looks like an famished man with a skull for a head covered in a ghostly white shroud. He is also mentioned in Kain's Lunar Trial, as Dark Kain's shrouded appearance and polearm remind the townsfolk of the legendary Grim Reaper.

The Blue Magic Doom summons the Grim Reaper. Hitodama appear around the target, followed by the Reaper floating away. The Reaper is dressed in faded red robes and carries a silver-colored scythe. It also appears when the player uses Predict and it generates the Pestilence effect.

The Death spell summons the Grim Reaper. In its red cloak and a scythe, it appears out of thin air and carries the target's soul skywards while laughing.

The Death spell from the Destruct Materia (also seen in Cait Sith's attack "Game Over" from his "Slots" Limit Break) summons the Grim Reaper. Its appearance is more machine-like, its head placed in a red saucer, abstracting its red cloak, and its arms oversized, with its right arm an outright scythe and its left arm large, with a crest with the kanji for death on its hand. The Grim Reaper emerges from black smoke and slashes its scythe across the target. These are the only ways to summon the Reaper; other instant death spells, such as Death Sentence, summon an elongated skull instead.

The Grim Reaper's appearance differs greatly from before, with its color scheme being black, red, and purple. It has a dark, mouth-less head and wears a horned skull. Its back has bat-like wings, and its red hands carry a darkened scythe. It is summoned using the spell Death and the command Doom.

The Grim Reaper wears brownish robes of Middle Age attire with a skull as its head. It appears with four spells: Lv5 Death, Death, Doom, and Roulette. There was a design for an alternate Grim Reaper to be summoned during the final battle, but this idea was scrapped. It appears to have been a precursor for Hades, which appears as a superboss in the final game.

The Grim Reaper's appearance is similar to the Malaysian penanggal: a bodiless shriveled head. It wears a horned headdress and a cape, and has only a clawed left hand. With that clawed hand it reaches into the target, extracting its soul and crushing it, killing the target.

When a player runs out of time in the Mog Clock a battle is initiated where the player cannot escape. Images of skulls shrouded in black mist appear on the screen during the battle transition, representing the idea of a Grim Reaper.

Also, Cie'th Gorgyra resembles a Grim Reaper and can even cast Doom.

The Reaper job introduced in Final Fantasy XIV: Endwalker is evocative of the Grim Reaper in both appearance and name.

A large Grim Reaper statue held a painting of goddess Etro, who is known as the goddess of death.

Worship of the Grim Reaper was to be a theme in Final Fantasy Versus XIII, but had to be toned down for Final Fantasy XV due to ratings concerns in certain countries. Explicit references were replaced by having the color black be special in the kingdom of Lucis. For example, the main cast dress in this color.[2] A winged skull motif still recurs within crests and banners of Lucis, and the main cast and Cor Leonis have skull motifs on their outfits. Grim Reaper-type daemons spawn in places where daemons lurk, skeletons who wear dark cloaks and wield scythes.

The revering of death remains as a theme, with the past kings lending their powers to their descendants, and the royal tombs being places opened for the current king to receive this blessing from the dead. In juxtaposition, the Niflheim Empire also gains power from death in the form of daemons, but this is a dark power that at least in Ardyn Izunia's case prevents one's ascension to the afterlife. The Ring of the Lucii, a Lucian royal heirloom, gains power through death as the Crystal's power is transferred into it when the ring-bearing king dies. The True King can restore light to the world by sacrificing his own life. As this is the Crystal's mission, the death iconography in Lucis could allude to the coming of the True King.

The emblem of Lucis.

Ruins of a Grim Reaper statue in Leide.

Grim Reaper appears when the Doom counter expires or Level 5 Death is used on a susceptible target by Jawbreaker or a Morpher using their powers. It will appear above the target, laugh maniacally and then draw the target's soul towards it, KOing them.

When the Death spell is used several Grim Reapers fly over the battlefield, which turns red. It also appears when the Doom counter reaches zero, when Doom is inflicted via Sniper's Death Sickle, and when instant kill moves such as the Parivir's Lifethread Blade are used. It flies onto the battlefield and seizes what appears to be the target's soul, and takes it off the screen.

The reaper will appear when a character uses the Death spellbook. A skull shrouded in a black cloth will appear on a target for a split second and vanish. He will take the target with him if the spell was successful.

The reaper is a slightly modified version of the reaper sprite from Final Fantasy Legend II. It appears when a character uses the black magic Fatal spell. A skull shrouded in a black cloth will appear on a target and vanishes after he finishes laughing. He will take the target with him if the spell was successful.

Concept artwork of the Grim Reaper from Final Fantasy VIII, by Tetsuya Nomura. 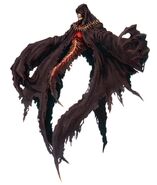 Unused concept artwork of an alternate Grim Reaper to be summoned during the final battle of Final Fantasy IX.

[view · edit · purge]The concept of death as a sentient entity has existed in many societies since the beginning of history. In English, Death is often given the name Grim Reaper and, from the 15th century onwards, came to be shown as a skeletal figure carrying a large scythe and clothed in a black cloak with a hood. In Japanese culture, the equivalent of the Grim Reaper is often the Shinigami, literally meaning "Death God".