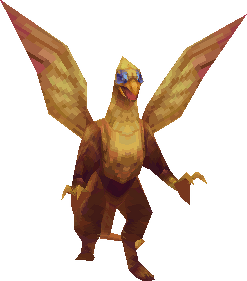 The Griffon (グリフォン, Gurifon?), also known as the Griffin, is a recurring enemy in the Final Fantasy series, introduced in Final Fantasy III. It is bird-like in appearance and often has powerful abilities.

The Griffon is an optional boss fought in the west tower of Castle Sasune. It is guarding a chest containing the Wightslayer.

It can also be encountered as a regular enemy near the town of Tokkul.

The Griffin is fought on the world map near Cosmo Canyon, and in the fourth round of the Battle Square during the time Tiny Bronco is available. It can become a long-ranged enemy, and can drain the party's MP. 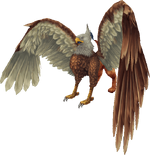 The Griffon appears near Gongaga Village and the Abandoned Mako Reactor. All elemental damage dealt to it is halved, and it uses the powerful Feather Shot ability.

The Griffon appears as an event boss in Final Fantasy VII G-Bike.

The Griffin is a flying enemy found in Fossil Roo and on the Donna Plains on the Outer Continent. Quina can eat the Griffin to learn White Wind. 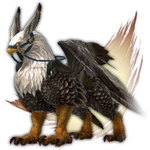 The founders of Ala Mhigo chose the griffin for their kingdom's standard for its strength, ferocity, cunning, and endurance─all traits that make the winged beastkin one of the most deadly creatures you will ever meet, if not the last creature you ever meet.

"The Day Of The Griffins" FATE Description

Griffins are fierce creatures native to Abalathia's Spine. They have a long history of serving as mounts, specifically in a regiment of the Ala Mhigan cavalry as mounts for soldiers who harried opposing forces, and is depicted on the flag of Ala Mhigo. They are often encountered as higher level enemies in places like Sea of Clouds and the Peaks.

A Griffin Mount is available for players who purchased the Collector's Edition of Heavensward.

Griffon is fought in Duscae, Cleigne and during The Professor's Protégé - Griffon Sidequest and the Ruler of the Brave Skies Hunt. It is a high leveled enemy with high HP.

The Griffon appears as an obtainable SR monster. It is a Thunder-elemental monster whose type is Climb, class is Avian and its specialty is Defense. Its hero tech is Thunderflap which unleashes a large circular shockwave. Its leader bonus is Charge which increases Thunder damage dealt by 50%. Its auto-effect is Water Damage -15% which reduces Water damage taken by 15%.

The Griffon is an enemy and also a possible monster that the party's monster unit(s) can transform into. It can be found on the fifth floor of the Tower.

The Griffon is an enemy and also a possible monster that the party's monster unit(s) can transform into.

The Griffon is an enemy and also a possible monster that the party can transform into.

The Griffin is commonly found in most of the plains and river areas, such as River Belle Path and Veo Lu Sluice. Although a rather large and dangerous monster, the Griffin's main weakness is its low magic defense. Almost all tier 2 magics will inflict a status effect on the Griffin, making the fight a little easier. 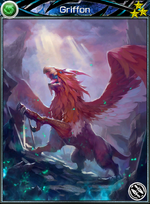