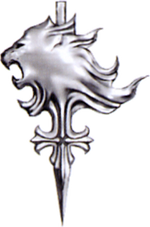 Griever (グリーヴァ, Gurīva?) is a term in Final Fantasy VIII. It is the name of a lion's head crest commonly associated with Squall Leonhart, who admires lions for their strength and pride.

Squall wears a chain necklace with a pendant of Griever above a cross reminiscent of the Cross of Saint James. The pendant emblem is also featured on Squall's gunblade case seen in the game's black-and-white intro.

Squall also wears a ring featuring a profile of Griever's head along with a wing along its side. When Squall finds Zell Dincht rallying the Garden troops in preparation for the Battle of the Gardens, he asks to borrow the ring. He gives it to Rinoa Heartilly for safekeeping until he can make a copy of it for her. She wears it next to her own ring through a chain around her neck. Eventually, Squall tells her to keep it.

The leonine form of Griever is represented on two of Squall's gunblades: the Revolver and Lion Heart.

For the Revolver, an etching of Griever's profile is represented on either side of the blade. A keychain representation of Griever's bust, similar to the necklace, is attached to the gunblade's handle.

For the Lion Heart, the magazine assembly is designed into a representation of Griever with a large wing and lion head, as well as two paws that follow the lines of the gun-section to the blade.

After Squall rescues Rinoa during the Battle of the Gardens they land outside Galbadia Garden and Rinoa explains she has Squall's ring, which leads to her asking what the lion on it is called. A naming screen comes up and the player is prompted to name the lion, the default being "Griever". This is the name Squall will give to Rinoa. The name is not referred to again until the final battle gauntlet where the boss will be named whatever the player named the lion on Squall's ring. 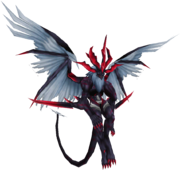 Griever is not only a symbol of the virtues Squall values, but is also Squall's interpretation of the ultimate Guardian Force. During the final battle, Ultimecia draws Griever from Squall's mind, bringing Squall's perceptions of the being into existence to fight the party. This is made more explicit in the Japanese version where Ultimecia claims to summon the one entity Squall views as the most powerful whose power would increase the stronger Squall envisions it, meaning this manifestation of Griever is powerful purely because of his importance as a symbol in Squall's mind. It could even be seen as Squall needing to overcome a part of himself to win the battle.

Griever uses the powerful Shockwave Pulsar and can draw magic from the party and attack with its claws. Griever can fully remove an entire stock of magic from a party member, as well as simply dispelling them sending them careening into time.

After Griever has been defeated, Ultimecia junctions herself to Griever for the final battle's third stage, creating a hybrid form of Griever with Ultimecia's torso and arms on its chest and deformed limbs and wings resembling Ultimecia's own more closely.

This form of Griever can cast Holy and Dispel and can instantly kill Guardian Forces through GF Lethal Strike. Another special ability is to summon Helixes, which allows the hybrid to cast not only Ultima but, if there are two of them, the powerful Great Attractor. 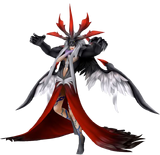 Ultimecia's EX Mode is a variation of her hybrid form with Griever. Rather than Griever taking on some of Ultimecia's qualities, Ultimecia takes on some of Griever's qualities, including a lion-like face with a white mane and white feathered wings. She uses using Griever's claws as her arms while her own arms are crossed over her chest. Ultimecia's EX Burst in this form is a variation of Renzokuken called "Time Compression". The finishing blow of her EX burst is called Sorceress Heart, meant to be a parallel to Squall's Lion Heart.

In her two alternate

, Ultimecia continues to junction Griever, the additions to her appearance taking on different color schemes to fit the outfit more. In her second alternative outfit Griever's wings are not added with the junction, as Ultimecia has no wings in her base form.

An alternate version of Squall's signature Griever pendant, previously only seen as a collectible sold by Square Enix, is worn by Squall in the game's ending. 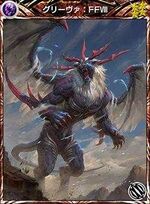 Since Griever is Squall's icon crest animal, the non-specific appearance of it is directly related with the appearance of Squall in other games and media, like the Kingdom Hearts series, Dragon Quest & Final Fantasy in Itadaki Street Special, Dissidia Final Fantasy, and related merchandise.

In the Kingdom Hearts series Squall still wears his Griever pendant, and his gunblade has the Griever key chain attached to the hilt. Squall's jacket has two red wings on the back, meant to symbolize both Griever and Rinoa.

Two Keyblades in the Kingdom Hearts series, the Sleeping Lion and the Lionheart, are modeled after Squall's gunblade and are decorated with silver Griever accessories.

The Griever pendant also appears, wrapped in black flame, in the Kingdom Hearts manga (more precisely, the first volume on page 84) as a symbol on one of the opening chapter pages. The image perhaps symbolizes Squall's defeat and inability to overcome the Heartless on his own.

Ultimecia appears in her Griever form in Monster Strike.

An image of the Griever charm can be seen backing system app icons while the Final Fantasy VIII Remastered theme is displayed on a PlayStation 4 system. 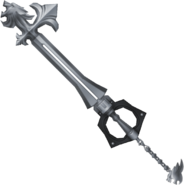 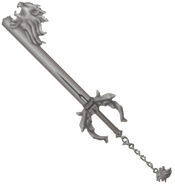 The Griever pendant, as it appears in the Kingdom Hearts manga. 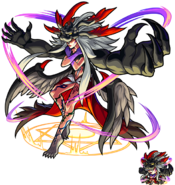 The two battles with Griever in Final Fantasy VIII each feature a unique battle track. The battle music used for Griever is titled "The Legendary Beast". During the battle with the fused form of Griever and Ultimecia, the music used is titled "Maybe I'm a Lion".

As Griever is associated with Squall it appears in most Final Fantasy VIII merchandise. Squall's Griever necklace and ring have been released as official merchandise, while other items, such as lighters, watches, and clothing, feature the Griever image. A figure of Griever, as well as one of Griever fused with Ultimecia, have also been released, as part of Final Fantasy Creatures Vol 1 and Vol 4, respectively.

As a special series of collectors' items, Square Enix began selling an alternate design of the Griever necklace, with a larger, more detailed cross with vines wrapping through it. This design would later appear as worn by Squall during the final FMV sequence in Dissidia Final Fantasy, albeit without the chain necklace.

A Final Fantasy VIII theme JVC minidisc player also exists, only acquired as a reward by entering a Coca-Cola prize draw in Japan. The minidisc player was limited to 5,000 pieces. The unit is manufactured by Victor Japan/JVC and has the Griever symbol embossed on the metallic plate on the front of the player, with the Final Fantasy logo in the corner, and the Coca-Cola logo on the back. The earphones have the Griever symbol on them as well.

A Griever-themed Final Fantasy VIII Zippo lighter has also been released, at the limited quantity of 1,000 pieces. Each lighter comes with a certificate of authenticity and they are serial-numbered. The lighter has the Griever emblem embossed on the lighter's surface, with the text "Sleeping Lion Heart". It comes with a solid steel stand with the Revolver and the text: Final Fantasy VIII. 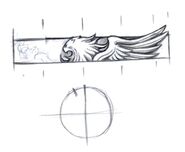 Concept art for the Griever emblem on Squall's Revolver.

Concept art of Ultimecia with Griever.

Griever's silhouette appears on the moon in the ending.

Squall and Rinoa talk about Griever. 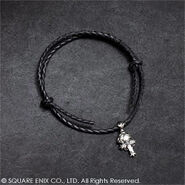 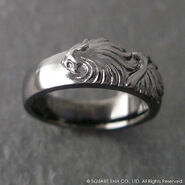 [view · edit · purge]The name originates from Russian "Грива" (griva) which means ruff or mane. It is transliterated to "Griever" in English, which comes from "to grieve" - "to feel great sorrow".

In the French version of Final Fantasy VIII, Griever is called "Cronos". [view · edit · purge]Cronos was the leader and the youngest of the first generation of Titans in Greek mythology, representing time.