The Black Shroud—the ancient forest close to the heart of Eorzea. Beneath the boughs of its towering trees lies the woodland city-state of Gridania. Once a sanctuary from the world beyond the Hedge, even the mighty elementals, eternal guardians of the forest, could not forestall the coming of the Seventh Umbral Era. However, the goddess Nophica was never one to forsake Her children, and today She welcomes another brave soul...one who may yet play a telling role in the tale of this great realm. May the Matron take [him/her](player character's gender) to Her Bosom, that [he/she](player character's gender) may never want. And in [his/her](player character's gender) heart sow serenity, purity, and sanctity.

Introduction for players starting in Gridania

Gridania is one of the city-states in Final Fantasy XIV, located on the Aldenard continent. It is located in the midst of the Black Shroud, a dense forest also known as the Twelveswood that serves to filter out those hostile toward the Elementals and those in cooperation with them. Gridania is by far the most unified of the city-states. Its guilds all work in cooperation with each other under the guiding hand of Kan-E-Senna, who brought back the Order of the Twin Adder.

Each tree, each shrub, each leaf, each blade of grass-we treat them as our own sons and daughters. And for that, we are loved by the wood.

In the eastern reaches of the Aldenard landmass, home to vast, dense woodlands and coursing rivers, lies the forest nation of Gridania. The cityscape is a mosaic of labyrinthine waterways and great wooden structures, so gracefully constructed they seem a part of the surrounding environment.

The Gridanian emphasis on natural harmony has led to its preeminence among Eorzea's city-states in trades such as forestry, agriculture, carpentry, and leatherworking. Gridania is also home to the Wood Wailers, a militant band of polearm-wielding sentries charged with the protection of their homeland.

The favored goddess of the citizenry is Nophica, the Matron, but great faith is also placed in the wisdom of the Seedseers—young oracles who guide the nation based on the will of the forest's elementals.

The elementals in the Twelvewoods around Gridania pervade all aspects of Gridanian culture. The Gridanians respect, and even fear, the elementals for the power they wield, and appease or communicate with the elementals through festivals and ritual dance. The elementals in the woods guard and watch over observant Gridanians, and would normally control creatures of the forest and use them to attack outsiders. A sort of barrier called the Hedge prevents outsiders from being subject to this violent elemental nature, called "woodsin" or "woodwrath". The Hedge occasionally falters, however, and when it does, those affected with woodwrath need to be purified through ritual dance.

After Great Flood of the Sixth Umbral Calamity, the Elementals of the Twelveswood took charge of the forest and banished any members of the spoken races. They allowed the Ixal to inhabit the forest for a time but when they began to overuse the logs of the trees in order to build their balloons, the Elementals banished them as well.

Meanwhile, groups of Elezen and Hyurs had retreated into the network of caves beneath the Black Shroud, forming a working society that eventually became the city-state of Gelmorra. However, while the Gelmorrans were able to live comfortably beneath the forest, some still longed for the surface and looked for ways to communicate with the Elementals.

These efforts eventually bore fruit when a Conjurer was able to successfully communicate with the Elementals and put forth their case for returning to the forest. The Elementals agreed under certain conditions, and as such work on a new city-state began immediately, with all of the Hyur and most of the Elezen opting to return to the boughs. Some Elezen nobles disagreed with the migration and remained within Gelmorra, but without the rest of their citizens, their society quickly crumbled, and these Elezen would become the ancestors to the Duskwight tribe. The Hearer who first communicated with the Elementals eventualy had a son who possessed special horns. The elementals claimed the boy a Padjal, one who had recieved their blessing and would serve as their representative in the new city-state of Gridania. Multiple Padjal would be born after, and all would be elevated to the council that served as Gridania's ruling body.

A raised platform where the city-state's Aetheryte Crystal is located. Chocobo stables are located between this plaza and the Carline Canopy.

A tavern and Adventurer's Guild run by Mother Miounne. Players starting in Gridania will initially be working under her. Inn and Levequest services are also available.

Airship docks are located in the back of the establishment.

Also known as the Oak Atrium, this guild is responsible for Gridania's timber industry. Carpenters can study their craft in this hall.

These barracks in an eastern vale serve as the Archers' Guild.

The headquarters of the Order of the Twin Adder. Players who are affiliated with that Grand Company can obtain tasks, goods, and create a Free Company here.

A gate at the south end past the Carline Canopy, this exit leads to the Jadeite Thick in the Central Shroud.

A gate at the western end, leading to Sorrel Haven in the Central Shroud. Due the dangerous creatures that live there, access is restricted to travelers who have authorization.

These barracks are the home of the Wood Wailers, who operate the Lancers' Guild here.

Also known as Atelier Fen-Yll, this building serves as a guild for leatherworking.

A large area that becomes the venue for many events held in Gridania.

Located at the western end, this facility is dedicated to botany and horticulture, and owns the Greatloam Growery.

An altar dedicated to Nophica, the Matron, it serves as the entrance to the Lotus Stand.

Gridania's seat of power, only those with permission may enter. Kan-E-Senna is usually seen here.

This sanctuary is the home of the Conjurers' Guild, where initiates are trained in communing with the elementals.

Located outside the Wailing Barracks, this pier offers ferry services to the East Shroud.

The main point of entry to/from the North Shroud.

A special area where the the An Eggsistential Threat FATE was held during Hatching-tide (2021).

Gridania's climate may exhibit any of the following weather conditions:

Gridania and Limsa Lominsa are about equal in popularity in terms of starting nations, both at a disadvantage to Ul'dah's convenient geographic placement and population density. However, Gridania has seen far more traffic due to Louisoix's exclusive presence here, drawing primal hunters from all over to initiate and repeat quests. Access to the battle for "To Kill a Raven" has attracted even more attention in recent days as well, although the recent addition of Skirmish has given Limsa Lominsa more business than usual.

Player reception of Gridania as a starting nation has been poor, many complaining about the layout of both the town and the outlying Black Shroud region. Because of this, Naoki Yoshida and his team have made its complete redesign one of the top priorities for 2.0. In the Seventh Umbral Era, it is expected that either this region or the adjacent region of Mor Dhona will be "ground zero" for the landscape-changing catastrophe.

Images of the redesigned region were released at E3, including concept art of a completely redesigned town and gameplay screenshots in a more open forest area. Unlike the current city-states, the new town will have an Aetheryte crystal in the middle of the town square, rather than in a secluded area on the edge of town.

Early leaks from the alpha test show that Gridania has been divided into two areas, called New Gridania and Old Gridania. The town has undergone aesthetic redesigns, but is largely the same. Many of the inaccessible areas have been opened up, such as the garden below the Botanist's Guild. The largest changes, as shown in other videos, can be found in the outlying Black Shroud region.

"Wailers and Waterwheels" plays in Gridania during the day time and "Dance of the Fireflies" plays during the night time.

Gridania appears as the Field Music Sequence for "Serenity". 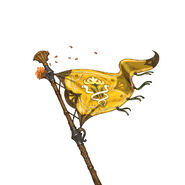 The lake near the entrance.

The adventure guild in Gridania.

The leatherworker guild in Gridania.

A shop in New Gridania.

The market in Gridania.