Dragonic wings and tail adorn this peculiar race. Able to fly for short distances, they move without hindrance across the battlefield. Gria prefer a weapon's cold steel to the subtle arts of magick, eagerly taking to the front lines.

The Gria are a dragon-like race from Ivalice, first introduced in Final Fantasy Tactics A2: Grimoire of the Rift. They are only seen in Jylland and all gria depicted are female.

The gria have small bodies and dragon wings, a tail, and horns. The gria are more proficient in physical attacks than magick and flying allows them to ignore the Jump stat, giving them an advantage in areas with high terrain, and allowing them to easily get behind units by flying over them. Unlike units equipped with Faerie Shoes, which use teleportation to ignore the Jump stat in a similar fashion, gria are immune to falling damage; if they are knocked off a cliff, the gria will slow their descent with their wings.

Wings of a dragon and a powerful tail distinguish this unique race. Outwardly small, some might even say cute, gria make vicious foes in battle. They have a fierce, competitive spirit.

Gria have four Jobs: the Ravager, Hunter, Geomancer, and Raptor. They can fly at will, ignoring terrain, so equipping a gria with Faerie Boots or Galmia Shoes is useless. Equipped with Ninja Tabi, they can become a highly mobile force on the battlefield.

Gria's class range is well-rounded, being comprised of two Warrior-like Jobs, one long range Job, and one magick Job. However, the player usually finds them last as they cannot be obtained until after the player has reached Fluorgis.

Gria can be obtained in these locations during Emberleaf or Plumfrost:

Prominent gria in the game include Mayhew and Lili of Prima Donna and Loa of House Bowen.

Gria appeared in Puzzle & Dragons as part of the Crystal Defenders collaboration. 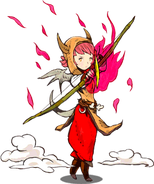 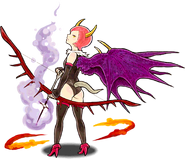 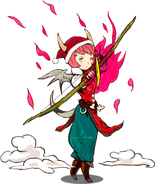 Lili of the Prima Donna clan.

Mayhew of the Prima Donna clan.