Limit
Grenade Bomb is Barret's first level 2 Limit in Final Fantasy VII. It performs a physical attack that will either hit a single target for 3.375 times Barret's normal physical damage, or hit all targets for less. Using it eight times unlocks Hammer Blow.

The Grenade Bomb attack consists of Barret firing a grenade at its target. The grenade is not visible, though after it connects, it causes an explosion hitting adjacent targets.

Grenade Bomb is obtained by killing 80 enemies with Barret. This can be sped up using the Enemy Skill Materia, particular if Matra Magic has been learned. Barret will need to equip this and can use Matra Magic to quickly kill enemies in the Grasslands Area, in the Mythril Mine, or in the forests of the Junon Area. Later on, the large forest in the Nibel Area past Mt. Nibel features a wave of six enemies (Battery Cap) and overall has around 4.4 enemies per encounter.

Grenade Bomb deals 3.375 times Barret's normal physical damage if fired against a single enemy. If fired against a group, it deals slightly less damage, distributed among the enemies. It is a versatile attack that can reliably hit multiple enemies, while still remaining useful against single targets and bosses. Grenade Bomb's damage is based on Barret's Strength stat and his currently equipped weapon. 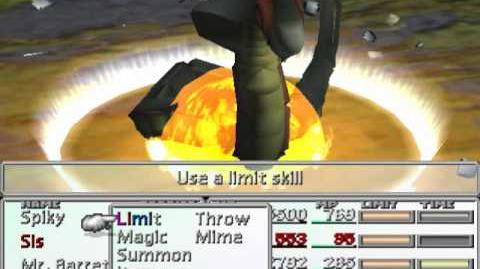