Greens (野菜, Yasai?, lit. Vegetable), also known as Carrots, are items in the Final Fantasy series. They are typically connected to chocobos.

Carrots can be bought in the town of Gysahl to summon Fat Chocobo. The Carrot is changed into Gysahl Greens in the 3D remake.

There are many different kinds of Greens, used for catching and breeding chocobos. When used in battle, they recover 100 HP to a target, and when given to a chocobo in battle, it makes the chocobo stay in the battle a little longer instead of fleeing. When given to captured chocobos at the Chocobo Farm, different varieties of Greens boost the chocobos' stats when raced in Gold Saucer.

Sylkis Greens are the best greens, and boost the chocobos' stats the most, but are also the most expensive, only available to buy from Chocobo Sage. However, Sylkis Greens (like all greens) can be duplicated with the W-Item duplication bug. Mimett Greens are needed in order to learn the Chocobuckle enemy skill and if given to the white chocobo in Mideel, the player can scratch it behind its ears and obtain a Contain Materia.

The Gysahl Greens are the only greens that appear. The names of the other Greens were used as names for alcoholic drinks in the pub in Timber.

Although not related to chocobos, Amnesia Greens are used to remove a Guardian Force's learned ability.

After completing the Chocobo Forests side quest, the player can talk to the chicobo left in the Chocobo Sanctuary to purchase more greens.

Multiple Greens appear, but only Gysahl and Pahsana Greens can be used in battle. The rest stay with Clasko in the Chocobo Ranch used to heal chocobos after their missions as part of the chocobo raising sidequest.

After Chapter 2, chocobos can be encountered in fights and captured by using the greens on them. If the chocobo is accompanied by enemies, the player must use the greens first, or any type of attack will cause the chocobo to flee. After the enemies are dispatched the player will have to use another Green to catch the chocobo. The Greens can only be obtained from Clasko at the Chocobo Ranch, and are free.

There are many different kinds of greens and carrots used as both feed and medicine for raising chocobos.

The types of greens and carrots:

Gysahl Greens are the only greens that appear. They can be bought as loot for 108 gil at the Clan Provisioner (after attaining the rank of Rear Guard), onboard Skyferries, and at Dyce's shop in Balfonheim Port.

Feeding them to the yellow chocobos wandering around certain locations will let the party ride them for three minutes. Gysahl Greens can also be obtained by killing enemy chocobos on the field; this might be a good option for those who save their money for special bazaar items which require large amount of gil to be bought.

Chocobo love this leafy green! You will need one for every chocobo ride.

Gysahl Greens can be used to ride chocobos and feral chocobos. Normal yellow chocobos only require one to ride while the feral chocobos constantly drain the stock while riding them. They can be bought in Chocolina's shop for 300 gil and found in New Bodhum 003 AF (x2), Bresha Ruins 005 AF (x2), Yaschas Massif (010 AF, 010 AF), Oerba 200 AF (x2), and Archylte Steppe ??? AF (x3).

There are a variety of greens, carrots, and fruits that are used as feed for raising and summoning chocobos. Gysahl Greens are the most common kind, used to call chocobo into battle as a companion. Others are used for raising chocobos in stables.

Since these greens are typically not eaten by the five races and beast-tribes, their trade is exclusively used for tending to chocobos. Gysahl greens are commonly sold by traders in the cities, but the other kinds must be homegrown in garden beds at personal houses.

There also exist fruit snacks that can be feed to stabled chocobos. These snacks will alter the pigmentation of the chocobo's feathers while it is stabled. The changes are based on RGB color scale, and may require some experimentation to get the desired tone.

Various greens appear and can be fed to the party's chocobos. Good feed boosts the chocobos' morale, but bad food may have adverse effects and have the chocobo be scared off by monsters, leaving the party to fend for themselves.

Carrots appears as a form of item:

Though not seen, two kinds of Greens; Sylkis and Gysahl, were mentioned by Earl Tyrant as seasoning for his food.

Greens are used to breed chocobos together. While chocobos can breed without greens, better chocobos are obtained by using rarer greens with a combination of parent chocobos. Some greens also have special effects, such as increasing the number of children produced in a single pairing. Some greens can be bought, but most of them are obtained from optional dungeons. 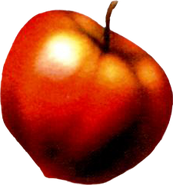