Green chocobo (緑チョコボ, Midorichokobo?) is a recurring type of chocobo. Though not often bred by the player, they are common sights in battle. They can heal and grants helpful status effects on allies.

Unlike blue chocobos, green chocobos are unaffected by the space section of the short course in chocobo races. It is unknown if this is a programming oversight or intentional.

Through chocobo raising, adventurers are able to breed and raise green chocobos for use as personal mounts. However, the chocobo's color is merely an aesthetic difference that has no impact on the bird's attributes or abilities. Additionally, Green Chocobo Dye may be used to cause a player's chocobo to appear to be green regardless of its actual color.

According to lore, a breed of chocobo known as the Jennet was sometimes bred to have a green appearance in order to better camouflage Mithra who wished to blend into the jungle.

Green chocobos are found in the Corridor of Ages and Piebald Path areas in the Salikawood. As opposed to the brown chocobos roaming the same areas, they are hostile towards the player and will attack them on sight.

Green chocobos can use Choco Cure to heal allies. Along with the other types of chocobo, they only appear in Midlight's Deep.

Green chocobos are found in the Yaschas Massif 100 AF and Yaschas Massif 110 AF. They can be recruited into the Paradigm Pack as Medics and have a variety of support abilities,

The player can dye their chocobo green at Wiz Chocobo Post, but the effect is merely cosmetic.

Green chocobos are one of the six types of chocobo, and can use Choco Cure, Choco Esuna and Choco Barrier to aid allies.

A green chocobo appears in the chocobo races in Gardenia.

Green chocobos give away summon stones if they are successfully fed. 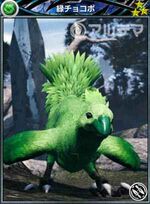 Sprite in Final Fantasy Tactics A2: Grimoire of the Rift.