Green Dragon (グリーンドラゴン, Gurīndoragon?), also known as Green D., G.Dragon, and Gas D, is a recurring enemy in the series.

Green Dragon is an enemy initially fought at the Waterfall Cavern and Chaos Shrine, and in the Game Boy Advance and later remakes, at the Lifespring Grotto. In the pre-GBA versions, it is the strongest dragon, but is far less powerful in later releases. It comes with a regular physical attack and the powerful Poison Gas ability. Green Dragons are weak to the Ice element.

Green Dragon is initially fought as a boss in Cyclone, protecting a chest containing a Wind Flute, and later as an enemy found in the Jade Passage. It attacks with a physical attack and the ability Poison Cloud XVI, and is weak to Lightning-elemental attacks whilst absorbing Poison-elemental attacks. Unlike other dragons, it drops the Healing Staff and Diamond Helm equipment as well as a couple consumable items.

Green Dragon is an enemy fought at Crystal Tower, and in the 3D remakes, at ??? where the Iron Giant is fought. It is a powerful foe as it focuses solely on regular attacks that can inflict Confuse while attacking twice per turn, and boosts a very high HP and Attack stat. In the 3D versions, it is notable for dropping the Elixir, Onion Shield, Onion Gauntlets, and Onion Sword, while in the NES version, it may also drop the Onion Helm.

Green Dragon is an enemy fought at Tower of Babil from hatching from a Mystery Egg, the overworld of the Underground, and in the Game Boy Advance and later releases, the Lunar Ruins. It is a decently powerful foe, having a moderately strong physical attack and access to the ability Lightning. In the non-3D games, it is valuable for potentially dropping the Siren and Silver Apple, while in the 3D remakes it is much more valuable for the Green Tail it can drop.

Green Dragon is a boss fought at the Tower of Babil. Green Dragon uses Thundara and has access to Toad. Once defeated, Rydia learns the Ramuh summon, and in addition it may drop the Blue Fang and Silver Apple. It is weak to Holy-elemental attacks.

Green Dragon appears initially as a rare enemy at the Agart Mine during Rydia's Tale, and later as two separate versions at the Subterrane. It is a notable enemy for dropping the Green Tail at the Agart Mine and during the Waning Moon phase on the eighth floor in the Subterrane, while the normal version drops Silver Apples. It uses regular attacks and Lightning to fight the party.

Green dragons are one of common forms of adult dragons, possessing green scales. Highly venomous, their noxious breath and even their bite can inflict poison on the unwary, and have been observed spitting poison goo on targets.

The Green Dragon fought in the Syrcus Tower in the Braid area after defeating Scylla, is a reference to the Green Dragons from Final Fantasy III found in the Crystal Tower.

Green Dragon appears as an enemy in Battle Music Sequences.

Green Dragon appears as an enemy in Battle Music Sequences. 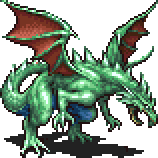 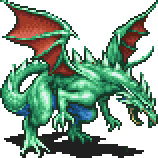 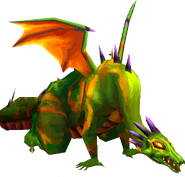 [view · edit · purge]Chromatic dragon is a classification of dragon in the role-playing game Dungeons & Dragons who are typically of evil alignment, in contrast to the metallic dragons, and their queen is Tiamat. White, black, green, blue and red dragons are the classic chromatic dragons. Final Fantasy has derived a lot of influence from D&D, especially the early series. Green dragons are the third-most powerful of the classic chromatic dragons who are aggressive, and prefer to use magic before attacking physically.