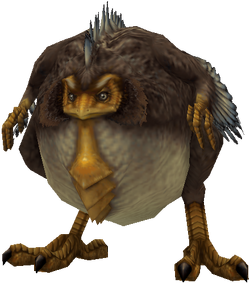 Would you look at this... all our cockatrices gone! I'd always left the pen open, and they never tried to escape before. What do you think got into them? There's nothin' to do but head out lookin' for 'em, but I don't even know where to start.

Great cockatrice escape is a sidequest in Final Fantasy XII where the domesticated cockatrice from Giza Plains' Nomad Village run away to explore Ivalice, and the party must find them and return them to the village. Finding the birds yields weapons as rewards.

To start the quest the player must kill the Cluckatrice (mark) and acquire Feather of the Flock (found in an urn in the Tracks of the Beast area of the Giza Plains during the Rains where the mark Gil Snapper is fought), and proceed past Draklor Laboratory in the story. The Feather of the Flock allows Vaan to speak with the cockatrice.

I as gath'rin' them sparkly pebbles, 'cos I thought as they'd make a nice pendant, see. Only trouble was, they'd vanish ev'ry time I tried to take 'em out the village. So I 'ad a bit of a think, an' I thought: wot if I got 'em out so fast, they wouldn't know they'd gone? An' that's when I made a break fer it...

Chit is in Eruyt Village. The player must collect Dewdrop Pebbles scattered around the village and give them to Mjrn to get a Yoichi Bow as a reward.

After collecting all the pebbles the player must give them to Mjrn, then talk to Chit, who will drop another Dewdrop Pebble.

What's all this!? Are you ruffling my feathers?

Renn is at Rabanastre's North End, but will run away and the player must catch him. The player can hide by the pillars next to the shops and wait for him to walk past. The player can try to catch up with him when he is turning a corner, or approach him slowly (not running) as he goes past. When the player catches up, they must answer: "Erm... no?". After the talk Renn is found north of the area. He asks if Chit has returned to Giza, and if she has, Renn will as well, earning the player a Diamond Sword in the original version and a Deathbringer in the Zodiac versions.

I wanna see Torrie, but I ain't goin' nowhere near that bleedin' Nathyl. I ain't thick!

Sassan is in Dalmasca Estersand South Bank Village near a hut, being scared of a tame wolf that lives in the village named Nathyl. The player must talk to him and then talk to Tchigri, the boy on the boat, and take the wolf Nathyl across the river. Next the player must take Arryl across, and last, take Sassan across the river. Following Sassan to the center of the North Bank Village and talking to him earns a Koga Blade.

Wot if I was to find a proper classy fella an' get 'itched!? Yeah! That oughta do it! That'd do it, no trouble!

Agytha is in the Grand Arcade area in the Central area of Archades, looking for a husband. The player must have a Sandalwood Chop to access the area via an elevator guarded by a docent, by earning all the available chops and trading them in a shop. Agytha also runs around the area, but is easier to catch than Renn was at Rabanastre. The player must speak to the male cockatrice in the Alley of Low Whispers area in Old Archades, then tell Agytha where to look to earn a Tumulus.

You 'eard me. I'm a chocobo, innit. Jus' 'cos a bloke's onna short side, it don't make 'im no bloomin' cockatrice.

Moomer is in the chocobo pen in the Sea Breeze Lane of Balfonheim Port pretending to be a chocobo. The player must talk to the Chocobo Wrangler by the pen and show her the Feather of the Flock, then talk to the Miffed Moogle who is looking to hire a chocobo, and then Gurdy to earn a Defender.