The Great Malboro is an enemy in Final Fantasy XII: Revenant Wings. It can be found on the second floor of Midlight's Deep. At first, there are six stationary Great Malboros at each point on the map that are surrounded by five or six King Bombs. More reappear from the center point as time goes by.
See also: Great Malboro 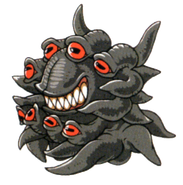 Retrieved from "https://finalfantasy.fandom.com/wiki/Great_Malboro_(Revenant_Wings)?oldid=3225992"
Community content is available under CC-BY-SA unless otherwise noted.