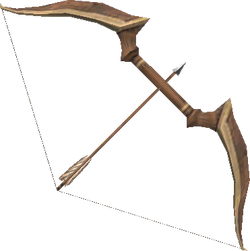 An evolved form of the long bow that can knock enemies out of the sky. This bow is longer and heavier than its predecessor, and thus even more difficult to maneuver. However, when shot from a high altitude the power its arrow carries as it catches momentum downwards can cause massive damage, especially in great numbers. If the enemy has archers on the battlefield, it is best to bring the great bow up to striking distance as soon as possible.

The Great Bow (グレートボウ, Gurēto Bō?), also called Gr. Bow, is a recurring bow in the series. It is often a low-ranked bow with no special properties.

The Great Bow is the second weakest bow, being slightly stronger than the Bow. It provides 18 Attack and can be bought for 1200 gil in Canaan in the 3D version. Otherwise, it must be found at Tokkul or at Cid's house. It can only be used by the Freelancer, Onion Knight, Warrior, Black Mage, Red Mage, and Ranger.

The Great Bow (originally called DwarfBow) is a low-ranked bow that provides 30 Attack, 75 Accuracy, and +2 Speed. It can be found in Troia.

In the Easy Type version, the Crossbow was renamed to Great Bow. Its hit rate was increase to 45%.

The Great Bow is a low to mid-ranked bow that provides 30 Attack, 25% Accuracy, and +3 Strength. It can be bought for 2000 gil at Mist, Kaipo, Agart, Troia, and Mysidia, or found at Tower of Babil as Edge or the Castle Waterway as Palom.

Great Bow i an archery weapon that provides 43 damage and 540 delay. It deals 4.78 damage per second and accumulates 145 TP per hit. It can be equipped by level 30 Warrior, Paladin, Dark Knight, Ranger, and Samurai.

Great Bow is a bow that provides 36 ATK, +50% physical damage against birds, 70% accuracy, has a damage range of 125-175%, and requires both hands to wield. It can be bought for 1,300 gil at Lost Village of Marlo, Downtown Zoldaad, and Underworld Gaberada, crafted using 260 gil, Wind Cryst x8, x3 Abominable Wing x3, and Silver Ore x3. 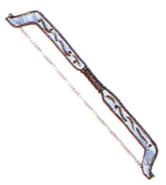