Final Fantasy Wiki
Register
Don't have an account?
Sign In
Advertisement
in: Characters in Final Fantasy: The Spirits Within

You've been trying to tell me death isn't the end, don't back out on me... now that I finally believe.

Captain Gray Edwards is a character in Final Fantasy: The Spirits Within. He is a military captain and leader of the elite Deep Eyes squadron that patrols the vast restricted wasteland overrun by Phantoms. He was one of the first ever photo-realistic computer-generated human characters to be created and used in film. Gray is voiced by Alec Baldwin.

Gray is a tall man with black hair. He wears the Deep Eyes protective gear when outside a barrier city on a mission, which covers his whole body and obscures his visage.

Determined, practical, focused, intrepid, honorable, and valiant, Gray is a loyal soldier, effective leader, and trustworthy friend. He lets his conscience guide him in his decisions and will trust the decisions of those he respects, even from those such as Aki Ross, whose beliefs he may not personally understand or believe in.

Gray is associated with recurring comments and scenes involving eagles. This may liken him as having "eagle-like" character traits, much in the same way Squall Leonhart from Final Fantasy VIII possesses "lion-like" character traits in his association with the lion motif, and Cloud Strife from Final Fantasy VII possesses "wolf-like" traits in his association with the wolf motif.

Born in Chicago in 2034, Gray was raised in a loving family. The eldest son of a civil engineer, Gray's father tried to keep his family safe and intact during the years before the barrier cities were developed. Forced to care for his family alongside his father at an early age, Gray showed strong signs of leadership. Prior to the construction of the Chicago Barrier City, Gray was active in the youth task force, providing protection and assistance to the remaining citizens of Chicago. In the draft of 2050, Gray was enlisted in the Los Angeles USMF. Praised for his quick thinking and skilled athleticism, Gray rose to the rank of Cadet leader.

Gray trained at the Houston Military Academy (HMA), the institution responsible for all military training in the United States Military Force and United States Air Force. During this period he entered a relationship with fellow military student Aki Ross. Upon her graduation, Aki returned to New York Barrier City to complete her doctorate, while Gray was assigned to the Deep Eyes military unit. Despite the distance, they continued their relationship between Gray's missions and Aki's commuting to other barrier cities. One day, Aki cut off their relationship without explanation.

Many months pass with Gray seeing or hearing nothing from her, until one night his squad is called to retrieve her from an unauthorized venture in the New York wasteland. Keeping his identity from her until well into the extraction, the two bicker as soon as Aki discovers who he is. Aki bypasses the city's contamination detector by saving Gray from a Phantom infection he had sustained during the extraction.

When Aki announces her contained Phantom infection to the committee, Gray realizes this is why she left him. He seeks her out, finding her embarking on a scan of the city for the seventh spirit. The two rekindle their relationship through the mischievous actions of Neil and Ryan. A suspicious General Hein temporarily assigns Gray's Deep Eye squad to accompany Aki on her remaining voyages, and orders him to report any suspicious behavior. To ensure Gray's compliance, he orders Major Elliot to insert some of his own men into the squad.

Aki's search for the seventh spirit leads her, Gray's team and Major Elliot's support to the Tucson wasteland and the remnants of the Phantom Cleansing Mission. Deducing that the spirit was the living energy inside the Ovo-pack of a dead soldier, Aki retrieves it. The Phantoms in the area react to the Phantom infection inside her and chase after her. Aki falls into a coma as the Phantom infection overcomes her, and Gray carries her the remaining way to the evacuation ship. During the escape Major Elliot's men attempt to take control, but Gray's team resists, resulting in the former group members' deaths.

Returning to the New York Barrier city Gray, Aki and his men are arrested on grounds of suspicions of collaborating with the Phantoms, but due to General Hein's attempts to stage a Phantom invasion, the barrier city's power grid goes off-line. The group escapes from the prison ward to discover the city overridden by Phantoms. Acquiring transport they make their way to the hangars where the Black Boa is detained, but only three (Aki, Dr. Sid, and Gray) escape to safety aboard the ship, as the others are killed.

Resting in space, Gray and Aki comfort each other over the deaths of their friends, becoming intimate. Dr. Sid begins the search for the eighth spirit and enlarges the search field to include the Phantom crater in the Caspian Mountains. Locating it as a Phantom, Aki and Dr. Sid, despite Gray's skepticism, devise a plan to obtain the eighth spirit by lowering Aki and Gray into the crater and fusing the spirit with the other seven spirits on location.

When an energy beam from the Zeus Cannon hits the meteor in the crater that originally brought the Phantoms to Earth, the eighth spirit is seemingly destroyed. As the cannon continues to attack, the Phantom Gaia appears from the meteor and begins to grow, dragging down the pod Aki and Gray are in. Despite pleading for Hein to stop, saying that the attack is doing more harm than good, Aki's cries fall on deaf ears, as General Hein continues to fire the cannon despite warnings of a system overload.

The pod damaged, Aki and Gray discover they have landed between the Earth Gaia and the emerging alien Gaia. Being this close to Gaia means they are in the best location to find another eighth spirit, and after falling comatose again, Aki discovers it from within her. Linking to her chest plate and using the OVO-pack of Gray's gun, she reroutes power into the pod's shields and emits the combined wave of all eight spirits.

As Dr. Sid, on board the Black Boa, winches Aki from the crater. Aki cradles Gray's body and watches the world's wildlife return.

Gray appears (along with the rest of the film's virtual cast) in a hidden Easter egg parody of Michael Jackson's "Thriller" music video created for the DVD release of the film.

The parody is set shortly after Douglas Hein inadvertently causes the destruction of the New York Barrier City's barrier control room. As he flees, he runs into Aki, Gray, Ryan, Jane, Neil, Dr. Sid, Major Elliot and three Phantoms who perform the dance number to "Thriller" with Aki as the lead.

When Aki operates on Gray (he is on the medical table) he has a reddish-brown scar on the lower left side of his neck (it is not a recent wound). It appears off and on for the rest of the film. After the operation, Aki turns around to pick up the canister containing the plant off a table where there is no table or ledge. DVD commentary reveals it is floating.

Gray loses four guns over the course of the film. The first one in old New York, the second when he picks up Aki in the Tucson wasteland, the third when jumping onto the Black Boa, and the fourth one he leaves in the Quatro before it blows up.

In the work print, right before Gray dies, Aki tells him that he must not die because she is pregnant with his child. The audience at the movie's preview screenings hated this plot point so much it was cut out from the theatrical release. The exact nature of the eighth spirit was thus also made ambiguous, as it could be the spirit of the unborn child or Aki's contained Phantom infection. 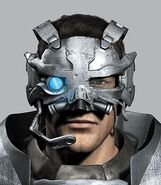 The original "shirtless" pose by Steve Giesler and Francisco A. Cortina.

[view · edit · purge]"Edward" is a common English given name that means "rich" and "prosperous"; several kings and nobles have shared this name.