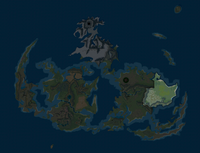 The Grasslands Area is a region of the World Map in Final Fantasy VII. It is located east of the Midgar Area with no clearly defined border, but begins where a mountain ends which is also where the extent of wasteland caused by Midgar's Mako extraction ends. Separating it from the Junon Area is a mountain with the Mythril Mine serving as a passage through. Off to its east and south are the Mideel Area islands, and to the north are the Goblin Islands.

Set up in the otherwise empty plains of the Grasslands Area is the Chocobo Farm owned by Choco Bill, who has made business out of running an inn and selling Chocobos and Chocobo Lure Materia to travelers trying to cross the marsh.

The entrance to the Mythril Mine is located across are the marshes, which are entirely enclosed by mountains, and therefore to reach it requires crossing the swamp. Miners from Kalm once used the mine, however increase in monsters has made it too dangerous. Among the monsters is the Midgar Zolom, an aggressive type of serpent that swims around the marshes and a threat to even trained fighters. Although it is possible to avoid the Midgar Zolom and cross the marsh without a Chocobo, catching and riding a Chocobo is much easier.

After crossing the marshes for the first time, the player will enter a one-time field where they see an impaled Midgar Zolom, however this event can be skipped with a menu press.

Old concept artwork of the World Map refer to this location as 大草原 (Daisōgen?), referring to large grass plains or a prairie[1], which is likely the term from which "Grasslands Area" was later derived.