Cid Pollendina: Oh, shut up and help me remodel the Grass page!
Please expand this article into a full one. The following tasks need to be completed:This request can be discussed on the associated discussion page. Remove this notice upon completion.

Short grasses rise from the soil.

Grass (草地, Kusachi?, lit. Grassland), also called Grassland and Meadow, is a terrain used throughout the Final Fantasy series. Grass area usually covers the bulk of the world map in most maps of the game, and always being the main terrain in the first World Map of a game. Grass is usually the only terrain where airships can land. Due to this, some areas don't use grass to prevent access until later areas of the game where other methods of transport become open to the player.

In Final Fantasy the only majorly grassy area are the surroundings of Cornelia and Pravoka, while the Melmond area is surrounded by barren plains due to Lich's draining of the Earth Crystal. However, the rest of the world map features several clearings among forest-like terrain so as to allow the player to land the airship.

The world map of Final Fantasy II is mainly composed of wide grasslands with the exception of the Mysidia, Palamecia and Salamand's Snowfields areas.

The Floating Continent features a wide ocean with grassy borders surrounding it and mountainous regions in the middle. On the other hand, the Overworld features less grassy terrains to land your airship on, but in any case, the Invincible does not need to be landed as it is boarded through a rope ladder.

Grass can be found throughout the overworld map, it is the only place where the player can land the airship.

Grass makes a return, and they can be found on the overworld map only.

Grass regions are prominently featured near South Figaro, Doma Castle, Kohlingen and Jidoor, and on much of the southern continent around Vector. The Veldt is a massive, sprawling plain of grasslands where monsters from the around the world migrate. In the World of Ruin, with much of the planet destroyed the largest regions of grasslands are the Veldt, and to lesser degrees Kohlingen and around Kefka's Tower, but otherwise much of the grasslands have been replaced with barren wastelands. The associated Dance of the grasslands and wasteland is the Wind Rhapsody.

Grass is the only terrain the Highwind can land on. Due to this, some places on the World Map purposely avoid using grass to stunt the player from accessing the areas before getting the Submarine or breeding chocobo.

Areas notable for a lack of grass are the tropical areas of Mideel and Gongaga, the barren surroundings of Midgar, the mountainous zones of Wutai, Cosmo Canyon, and Icicle Inn, as well as the remaining Materia Caves, including the entirety of Round Island. Also, the grass area around ??? isn't large enough for the Highwind to land. The North Corel Area contains one small area with grass too small to land the Highwind on, and is also special because no encounters can be fought on it.

Due to grass being the main terrain used in the world map, enemies have few defining characteristics.

Grass covers most areas in the Mist Continent. On the other continents grass is rarer, however grass appears on Lucid Plains at the Outer Continent and certain parts on Forgotten Continent and on the small islands near it. The Lost Continent however is grass-free.

Grass appears in the Calm Lands and parts of Besaid and Kilika.

The same areas returns in the sequel to Final Fantasy X.

Many of the areas in Final Fantasy XI, such as Ronfaure, La Theine Plateau, Batallia Downs, Sarutabaruta, and the Rolanberry Fields, have grassy terrain. Most field areas contain at least a little grassland.

In Final Fantasy XI, terrain does not matter with regards to combat, chocobos, or airships, so the effect of the terrain is mostly aesthetic. Some grassy areas contain "Harvesting Points", however, that adventurers may reap using sickles. They thereby obtain items, including the grass itself, for use in crafting.

Grass grows on the Plains of Eternity on the Archylte Steppe.

Several areas of the Wildlands feature grass. It grows most prominently at the Eremite Plains.

The La Noscea region is characterized by its meadows. Other places such as the Dravanian Hinterlands and some of the floating landmasses in the Sea of Clouds feature prominent grassland terrain.

There's a terrain tile called Grassland in Final Fantasy Tactics. A Geomancer standing on the Grassland terrain tile will use Tanglevine to deal Non-elemental damage with a chance of inflicting Stop to any enemy units within five squares.

The entire Earth Region is decaying when Benjamin sets out on his adventure in this region. This is due to the Crystal of Earth having gotten its power drained by Flamerus Rex, having the life force of the earth stolen has made the plants wither and die away. Once the Crystal of Earth is restored, the plants and trees cover the landscape once again in the lush greenery that it once held.

Meadow makes up the majority of the area across the world. It's a low grass that covers the land and allows the player to travel in all directions.

The continent in which Cornelia is on is mostly grassland. The areas that are grassland are Bridge Overlook, Cornelia Region and the Watchplains.

Battle background in Final Fantasy IV: The After Years (Wii).

Grass on the world map in Final Fantasy VI.

Grass battle background in Final Fantasy IX, under the influence of the Mist.

Second grass battle background in Final Fantasy IX, under the influence of the Mist. 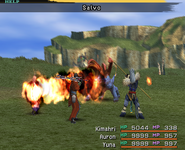 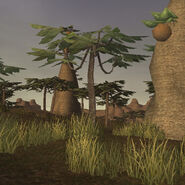 Grass, or more technically graminoids, are monocotyledonous, usually herbaceous plants with narrow leaves growing from the base.

This section about a location is empty or needs to be expanded. You can help the Final Fantasy Wiki by expanding it.
Locations
Community content is available under CC-BY-SA unless otherwise noted.
Advertisement