Cid Pollendina: Oh, shut up and help me remodel the Grandshelt Castle page!
Please expand this article into a full one. The following tasks need to be completed:This request can be discussed on the associated discussion page. Remove this notice upon completion.

Grandshelt Castle is a location in Final Fantasy Brave Exvius. The castle was built to the north of Royal Capital Grandshelt, and its gate is guarded by two soldiers. It is home to the King of Grandshelt, ruler of the Kingdom of Grandshelt's territories.

For centuries, a crystal that contained a mysterious girl rested below the castle. Sir Raegen, a respected knight of Grandshelt, entered the caves in order to search for it, but unbeknownst to him, his young son Rain followed him. Rain found the crystal and touched it out of curiosity, thereby "sealing his fate."

Years later, by the time Rain is eighteen and a knight in his own right, the castle is attacked by an army led by Veritas of the Dark, a member of the Sworn Six of Paladia. Rain and his friend Lasswell, upon their return from the Earth Shrine to report the Earth Crystal's shattering, find the castle sieged and enter its premises, fighting against the invading monsters (including the Flamesblade, a monster summoned from the Farplane) in order to rescue the King of Grandshelt. When they save him, the castle starts to burn but they manage to leave through the entrance.

It is then that Veritas reveals himself, as well as his affiliation, to the two friends with the power of visions. He attempts to kill them as well, but the girl in the crystal appears and shelters them from the attack. The crystal encasing her shatters, much to Veritas' satisfaction, and he leaves. Upon ensuring the casualties' safety and leaving the King and Fina with the medics, Rain and Lasswell leave for Port City Lodin to hire a ship that will take them to Dirnado, home of the Wind Crystal—leaving to the other knights the reparation efforts.

Use a limit burst

Deal fire damage to an enemy

Defeat the flamesblade with a limit burst 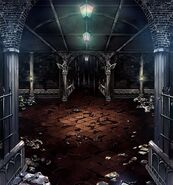