The Kingdom of Grandshelt is a nation in the world of Lapis, featured in Final Fantasy Brave Exvius. Its main territories are the Grandshelt Isles, where the capital is located, followed by Lanzelt and the decaying Kolobos Isle. It is the homeland of Rain and Lasswell, the game's protagonists. The continent also houses the Earth Crystal in the Earth Shrine; though nowadays a peaceful nation, Grandshelt is a poweful one thanks to its excellent army and, most famously, its Royal Guard.

As the first continent visited, Granshelt is home to many low level/low energy areas, perfect for Trust Master farming.

It is unknown when, how or why the kingdom came to be, only that it was the work of its legendary founding father, described as a mysterious swordsman of unknown origin "with locks of gold and blue eyes tinged with sorrow". Unbeknownst to all, the founding father, Raegen, was a man of Paladian origin, who had been exiled from his world along with his comrades (which dates the kingdom's foundation to less than six centuries ago) in the final battle of a civil war between their nations. With them eight elemental crystals came, including the Earth Crystal that ended up in Grandshelt, as well as a crystal containing one of Hess' Sages, Dark Fina, which would remain for centuries below Grandshelt Castle.

The people of the Grandshelt Kingdom, who were skilled in using the power of the crystals to their advantage, displaced a hunting tribe (to which Gimlee belonged) in order to settle in the archipelago.

In times past, Clyne, a knight and army commander who earned the loyalty and love of his people, defeated a cruel despot and became king of Grandshelt. However, he knew very little about ruling a nation, and proved unequipped to handle the politics attached to such an office. He eventually lost his life, killed by his own son, amidst a conspiracy involving succession to the throne.

Long ago, there was time when many nations clashed for control of the crystals. Back then, a warrior of modest talent, Rizer, rose above his peers due to his strong desire to protect Grandshelt and became its army's commander. He fought bravely and tirelessly against an invading army that sought to claim the Earth Crystal.

In the time before airships, the Grandshelt-born[1] Gilbert was a bard who played a vital role in the spread of information. Yet, due to his criticism of authority and the status quo, he was forced into exile. He was the target of countless assassination attempts, until the authorities put a violent end to his enlightenment of the masses, but he encouraged the people to rebel against their oppressors with one last song.

Twenty years ago, Raegen returned in his search for the Sacred Ring of Paladia, joining the Royal Guard in order to gather information. His quest came to an end when he heard of an Ochu terrorizing Latius Woods; after defeating it, he retrieved the vessel and sought to cure his brother, Rowen, who suffered from amnesia. When he refused, Raegen took the sacred vessel and it in the Lanzelt Ruins.

Ten years or so later, a wave of children kidnappings beset the kingdom...

The game starts when Rain and Lasswell, two knights, are embroiled in a plot orchestrated by Veritas of the Dark that requires the Earth Crystal's destruction. This is after Rain receives visions of a woman encased in crystal. During this, the two Knights obtain the power of Visions gifted to them by the young woman encased in Crystal. Chasing Veritas from the Earth Shrine back to the capítal, the two find that due to the shattering of the Earth Crystal, monsters became more bold and attack civilization, as well as an organized attack on Grandshelt Castle. When facing Veritas once again, the woman encased in Crystal saves them and breaks out of the Crystal, with no memories except her name: Fina.

The three decide to pursue Veritas and stop him from accessing the other Crystals. Traveling from the Grandshelt Isles to Lanzelt, they catch up to him in the Lanzelt Ruins, where Darklord defeats them, but spare their lives. Not deterred, the three take a ship headed to Dirnado, where the Wind Crystal lies.

On the way, the ship they were on had to stop at the zombie-infested Kolobos Isle. There they attempted to help a little girl Emma find her mother, a researcher whom she claimed was in the ancient Shrine of Decay. Upon reaching Felicitas Town on the way, a fellow researcher revealed to the party that Emma's mother had died in the Shrine. Despite the lies, Lasswell, Rain and Fina continue to escort Emma to the Shrine. At the Shrine, Rain and Lasswell discover that the bodies of their subordinates, killed by Veritas, where transported there to be turned into creatures by Dr. Lazarov, who was working for Veritas and also killed Emma's mother after she objected to his horrendous experiments. Lazarov escaped, however and the three said their farewells to Emma and left the continent of Grandshelt for Dirnado.

An archipelago comprised of a main island, a volcanic island to the north, and several smaller islands. The kingdom's capital is located there, as is the Earth Shrine that safeguards the Earth Crystal, for which the kingdom has gone to war in the past. Other population center of note are: the small Town of Mitra, Port City Lodin which enables travel to its sister city Port City Lydira, and Ordol Port. It is also home to two espers: Siren and Ifrit.

Lanzelt is an island located to the southeast of Grandshelt Isles, and has a mostly mountainous landscape with a desert to the south. Its most important settlement is Grandport, a bustling center of maritime trade that has routes to the Dirnado continent. Other centers are Lydira, the mining-oriented Village of Kol, and the Lost Village of Marlo. The island's snowy mountains are home to the esper Shiva, while its desert hides the sealed Golem.

Once a more prosperous island. When its main industry—crystal farming—could no longer sustain its main port, it became a ghost town. Felicitas Town is a settlement near Ramuh's sealed location. Another location of note is an abandoned temple known as the Shrine of Decay.

Map of the Grandshelt Isles. 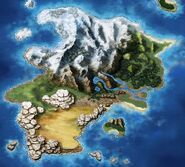 Map of the Kolobos Isle.