Grand Mantis is an enemy in Final Fantasy VIII. It is a giant insect enemy fought on the Centra continent.

In its artwork it is referred to as "Ground Lobster", although the accompanying Japanese itself would translate to "Grand Lobster" (グランドロブスター, Gurando Robustā?).

Used to live in water, but now lives above ground. Skewers enemies with its large claws and causes major damage.

With its high HP and Vitality, this beast can be hard to bring down without magic. The player can protect the party against Silence for an easier battle.

Grand Mantis is a Level 2 Triple Triad used for playing the minigame and for turning into Sharp Spikes with Quezacotl's Card Mod. 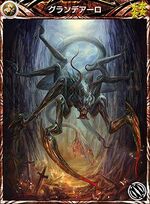 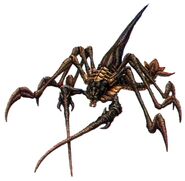 Super Arm.
Add a photo to this gallery

[view · edit · purge]Mantises is an order of insects that contains over 2,400 species and about 430 genera in 15 families worldwide in temperate and tropical habitats. Most are in the family Mantidae. A common name, often applied to any species in the order, is "praying mantis" due to the typical "prayer-like" posture with folded fore-limbs, although the eggcorn "preying mantis" is sometimes used in reference to their predatory habits. In Europe and other regions, however, the name "praying mantis" refers to only a single species, Mantis religiosa.

The enemy's Japanese name may reference the Devil Crab from Final Fantasy V who is known as Dearo (デアロ?) in Japanese, while Grand Mantis's name is a portmanteau of "grand" (グランド, gurando?) and Deāro (デアーロ?).

Retrieved from "https://finalfantasy.fandom.com/wiki/Grand_Mantis?oldid=3350932"
Community content is available under CC-BY-SA unless otherwise noted.