And though the Land is riven and the Heavens torn asunder, It is from this Chaos that our bonds are given strength.

The Grand Companies of Eorzea, also know as simply Grand Companies, are a feature added on the 1.17 patch in Final Fantasy XIV and set for expansion on the following patches. It revolves around the three Companies of Ul'dah, Limsa Lominsa, and Gridania, groups formed by the city-states in times of danger to form a cohesive command center in order to prepare for said threat. The Grand Companies reprise their role in A Realm Reborn as a gameplay element.

In the original version, Companies follow their own quest chain system, offering seals that can be traded for items, unique equipment or to reach higher ranks inside the Company. Players cannot join all three companies, they must choose one and are 'locked' into it. However, they are only locked into a Company after the Recruit rank, which means that you can be a Recruit on all three Companies at the same time.

In A Realm Reborn, players are invited to join a Grand Company after a certain point of the Main Scenario quests. Unlike in version 1.xx, there's no specific quest chain; instead players may perform Grand Company levequests, supply missions (deliver crafted gear), provisioning missions (deliver gathered materials), and at higher ranks Expert Delivery (donate rare equipment) to earn Grand Company seals. Promotions are earned by accumulating a certain amount of seals, with Captain currently the highest rank available to players.

For thousands of years, Eorzea has been victim to a catastrophic cycle of destruction and rebirth that periodically envelops the realm and threatens all who live upon her soil; each time faced with a tragedy seemingly worse than the last, however, the peoples of Eorzea have found some way to persevere. One method, seemingly going back hundreds of generations, has been the establishment of comprehensive command centers which combine the military, economic and technological resources of a city-state in order to better prepare it for the coming doom. These are the Grand Companies of Eorzea.

The last recorded emergence of the Grand Companies was nearly 1,500 years ago, at the end of the Fifth Astral Era and the arrival of the great deluge which triggered the dark period known as the Sixth Umbral Era. It was through these companies that the then warring city-states were able to put aside their bitter differences and join together to form an alliance and ensure the realm survived.

With the recent attacks by the Garlean Empire seen as an imminent threat to the realm, there have been scattered talks of restoring the Grand Companies to their former glory, but conflicting agendas on all sides have slowed progress. That is, until the appearance of an adventurer who set in motion the wheels of hope. 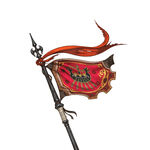 At the heart of the Thalassocratic Navy lies the Lominsan Armada, composed of nine independent squadrons, the First through the Ninth. The Maelstrom is an extension of the First Squadron, expanding its role as armada flagship and granting it power to administer not only the remaining eight squadrons, but the various merchant fleets that navigate the seas off Vylbrand.

With the reestablishment of the Maelstrom, the Admiral has also begun the move to invoke ancient maritime law, by which she would promote herself to Chief Admiral, effectively expanding her authority to cover not only state and military dealings, but grant her the power to directly command all ships in Lominsan waters, and freely punish any who disobey. Needless to say, the city-state's pirates are not about to take this encroachment on their freedom without a fight.

The Order of the Twin AdderEdit 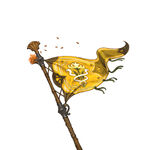 The Order of the Twin Adder establishes a medium from which the Seedseers can return from their wanderings deep within the Black Shroud and directly oversee not only the safety of Gridania's citizens, but the workings of the local guard, Both the Gods' Quiver, who defend the forest from external threats, and the Wood Wailers, who protect it from internal strife, have expressed their support of this temporary measure.

There are, however, those within Gridania who would question the ability of the Seedseers, whose duties until now have been limited to various ritualistic proceedings, and doubt whether or not they are fit to lead a nation into war.

The Order of the Twin Adder is led by Elder Seedseer Kan-E-Senna and Grand Serpent Marshal Swethryk Brookstone. Adventurers may join the Yellow Serpents, under High Serpent Commander Vorsaile Heuloix. Twin Adder uniforms are distinguished by their bright yellow pigment.

Currently, the bulk of Ul'dah's military strength comes from their standing army of mercenaries and the small contingent of the palace guard known as the Sultansworn. To bring order to their ranks and oversee additional wartime training, the Sultana has considered resurrecting the Immortal Flames—an elite force of battle-hardened veterans that once instilled fear in the city-state's neighboring nations during ages past.

This unit would act as a core aspect of the army, essentially bolstering its power, and in effect grant more authority to the Sultana and her advisers--something of which those in control of the city-state's economy—namely the Syndicate—are wary.

During the later events of A Realm Reborn, Alphinaud Leveilleur came to view the Grand Companies as inadequate for covering all the emerging threats to Eorzea. With the blessing of the City-State leaders, he created an independent Grand Company called the Crystal Braves answerable only to Minfilia Warde and the Scions of the Seventh Dawn. This company was created to deal with problems too large for any one city-state to handle and cover the gaps between the existing Grand Companies; with their home base located in the settlement of Revenant's Toll.

The Crystal Braves are led by Alphinaud and Grand Crystal Marshal Ilberd Feare. Unlike the other Grand Companies, adventurers cannot directly join the Crystal Braves or perform levequests and supply missions for them. Crystal Brave uniforms are distinguished by their ultramarine color.

The Crystal Braves were later disbanded by Alphinaud following internal struggles, corruption, and events that occur just before Heavensward. Those still loyal to Alphinaud became part of the Scions of the Seventh Dawn. 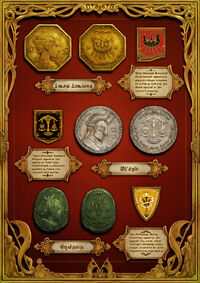 Company seals are the main currency used to exchange for items from the Company Quartermaster, some of those unique to each company, as well to advance in company ranks. Initially, players can hold a max of 10,000 seals, but as they go up in ranks, they can hold a maximum of 80,000 seals.

There are a number of ways to acquire grand company seals:

A specific denomination pertaining to The Hunt, these are awarded to players that have successfully defeated the targets of daily mark bills or an Elite Mark found in Eorzea's wilderness. Allied Seals can be traded for items not available with Grand Company seals.

Enlisted players can ascend ranks in their respective Grand Company. Each of the Grand Companies follows the same hierarchy of ranks, with a prefix to denote allegiance: Storm for Maelstrom, Serpent for the Order of the Twin Adder, and Flame for Immortal Flames.

Players who have reached Second Lieutenant or higher are eligible to begin training Adventurer Squadrons. They are also eligible to request a transfer to another Grand Company.