A world wild and fragile, vibrant and untamed. Gran Pulse. It's a placed ruled by the brutal struggle for survival, and the callous and uncaring whim of the fal'Cie. There is no such thing as mercy...only a never-ending string of trials that weed out the weak, and leave only the strong.

Gran Pulse, also known simply as Pulse (下界, Shikai?, lit. Netherworld) to the citizens of Cocoon, is the world in Final Fantasy XIII and Final Fantasy XIII-2. The artificial world of Cocoon floats in its atmosphere. Gran Pulse can be considered the parallel of Cocoon as a world of natural evolution where animals and plants can grow to tremendous sizes. Director Motomu Toriyama has compared the size of Cocoon to that of North America, and Gran Pulse as similar in size as Earth.[1]

The savage world derives its name from that of the god Pulse. Its vast wilderness is populated by creatures ranging from the monstrous to the deadly, and its fal'Cie seem to have taken a decidedly less friendly approach toward human dealings than those of Cocoon, cultivating the land for settlement, but demonstrating little concern beyond that.

At one time in its history, Gran Pulse was home to a thriving civilization and many great cities. Now it is home to many great ruins, and people are nowhere to be seen.

When the party first arrives to the lowerworld in Final Fantasy XIII, Lightning calls it Pulse. Vanille corrects her to the correct name "Gran Pulse", and from that moment onward, the Datalog refers to it as Gran Pulse instead of Pulse.

The lowerworld, known as either 'Pulse' or 'Gran Pulse,' is an unforgiving wilderness infested with predatory monsters. This world once boasted a civilization that stood in conflict with Cocoon, but traces of its culture exist only in ruins.

The people of Cocoon are made to believe Gran Pulse is a living hell for humans. To remain in control, Cocoon's governing body, the Sanctum, keeps the populace in fear of a Pulsian invasion. The fear was strengthened by the War of Transgression, a war between Cocoon and Pulse many centuries ago where a Pulsian army attacked Cocoon. Cocoon's shell was cracked, and many Pulsian artifacts and warships are now found in areas near Cocoon's outer-rim, like the Vile Peaks and the Hanging Edge.

In truth, the citizens of Gran Pulse were no different than the people of Cocoon, as they saw the floating world as the source of evil and eventual invasion. The fal'Cie of Cocoon would steal resources from Gran Pulse, and lure Pulsians to Cocoon with promises of a paradise, fueling the hatred between the two worlds.

At the time of Final Fantasy XIII, the civilization of Gran Pulse has nearly been wiped out with lingering architecture its only living testament. The buildings of Yaschas Massif and Oerba suggest an advanced culture, though primitive in comparison to the highly advanced Cocoon. It is unknown how Pulsians died out, but it is suggested many were transformed into l'Cie during the war, and as a result Pulse is populated by monsters and Cie'th. In Final Fantasy XIII Episode Zero -Promise- Part VII: Tomorrow, it is stated the fal'Cie deity Lindzei played a part in wiping out humanity.

During Final Fantasy XIII-2 it is revealed a nomadic tribe known as the Farseers, originally hailing from the ancient city of Paddra in Yaschas Massif, still live on Pulse led by the seeress Yeul. As the only known survivors of the war, they avoid contact with modern civilization, aware of the prophecy that warns of conflicts between other humans, and forgo using advanced technology. The nomadic hunters of the Archylte Steppe in Final Fantasy XIII-2 are also thought by some to be descendants of the original inhabitants of Pulse.

According to Datalog entries, Gran Pulse is named for its creator, the "Hallowed Pulse", who forged the world and its original inhabitants. After departing centuries ago, he entrusted the world's perfection to the fal'Cie, who continue about their tasks.

The fal'Cie of Pulse form a stark contrast to those of Cocoon in holding no particular relationship with humans. However, their workings indirectly gave rise to human civilization, making them as revered as they were feared. Some were wont to impose onerous missions upon the people they branded as l'Cie, a fate that was almost always a death sentence. These fal'Cie constructed the Arks, armories filled with Pulsian weapons said to be hidden all around the world, whose exact purpose remains ambiguous.

When the six Pulse l'Cie reach the end of the Fifth Ark, they leave Cocoon for Gran Pulse in the hopes of finding a way to remove their brands. Setting up camp in the Vallis Media, they embark on a days long search for humans but to no avail. The party travels to Vanille and Fang's hometown of Oerba, but finds it empty and lifeless. After battling Barthandelus, the l'Cie return to Cocoon.

After Orphan's demise, Cocoon begins to fall from the sky. Fang and Vanille become Ragnarok and crystallize Cocoon, erecting a colossal crystal pillar to support it over Gran Pulse. Some of the surviving Cocoon inhabitants settle on the lowerworld.

In Final Fantasy XIII-2 Fragments Before, it is revealed that PSICOM was terminated along with the Sanctum after Cocoon's fall. When the new provisional government revealed the truth behind the events leading to Cocoon's fall, the remaining soldiers were chased out of Cocoon for their role in the Purge. They left their families, fled to the frontier lands of Gran Pulse, and formed distant settlements far from those who would retaliate. Meanwhile, their families would suffer discrimination out of association.

In the three years since Cocoon's fall, survivors moved to Gran Pulse and built a small settlement near the base of the crystal pillar, and a small coastal town called New Bodhum. Some learned to use magic formerly exclusive to l'Cie, and several discoveries reveal people have been living on Gran Pulse until recently, contrary to common belief that they had been wiped out by the War of Transgression.

One night, a crystalline meteorite falls near New Bodhum, and monsters attack the village. When Serah is attacked, she is saved by Noel Kreiss, a Pulsian hunter from a doomed future who traveled through time to find her at her sister Lightning's request.

Serah and Noel set off to find Lightning in Valhalla and save the future. Using the Historia Crux, Noel and Serah visit some old and new locations on Pulse that show advancements in technology, such as Augusta Tower, and the futuristic metropolis of Academia, the city that began construction near Cocoon's crystal pillar in 3 AF.

After Noel and Serah reach Valhalla and defeat Caius, they unknowingly destroy the Heart of Chaos that keeps the goddess Etro alive. They return to year 500 AF in Academia, but the unrestrained chaos of Valhalla bursts from Etro's gate. The new man-made Cocoon, called Bhunivelze, and all of Gran Pulse, are infected, and the world gradually transforms into Nova Chrysalia.

Parts of Gran Pulse remain on Nova Chrysalia that is gradually being eroded by the Chaos. In the Wildlands the ruins of Academia remain, and the Dead Dunes is what remains of the Archylte Steppe, dried up and turned into a desert. The man-made Cocoon called Bhunivelze also remains, floating in Nova Chrysalia's atmosphere. As the Apocalypse starts the old world is destroyed and sucked into a new unseen realm.

Concept artwork for Final Fantasy XIII show a different Gran Pulse than the one in the game, with people among in the cities and flying vehicles. The worlds of Cocoon and Gran Pulse display contrasting musical styles. Composer Masashi Hamauzu has explained that Final Fantasy XIII was intended to be a long game, which in itself provided some challenges. He felt it was important for there to be variety to the sound design to maintain players' interests over a span of time, and that is why the themed motifs are reintroduced here and there as a kind of obbligato.[2]

Final Fantasy XIII-2 Ultimania Omega reveals scrapped plans for the game. Cocoon's former capital Eden was planed to have crashed into either Oerba or Archylte Steppe. The scene of Eden in Archylte Steppe was to be in the distant future where the ancient capital of Cocoon would have been covered by vegetation.[3] Other conceptual artworks show Archylte Steppe 900 years after the ending of Final Fantasy XIII with a great city with high buildings, including a similar building to the government building of Eden in Final Fantasy XIII. This place would have had day and sunset versions.[3] The Thirteenth Ark was envisioned as a visitable location, but in the final game is only seen hovering above Academia in the distance.[3] It was also planned that Snow would appear in a downloadable episode where he would ride his Shiva Sisters motorbike across the Steppe while battling monsters.[3][4]

On Cocoon names are written in the personal name, family name format common in many individualistic societies, while on Gran Pulse, names use a format common in collectivist societies with the area in which the person hails from first, and then both their clan (family) name and personal names after. Two examples are Oerba Dia Vanille ("Vanille of the Dia clan, from the village of Oerba") and Paddra Nsu-Yeul ("Yeul of the Nsu clan, from the nation of Paddra"). Two notable exceptions are Noel Kreiss and Caius Ballad, whose names are in the form used by the people of Cocoon.

Artwork of the party on Pulse.

Artwork of the party on Pulse (2).

Early concept art of the people of Gran Pulse. 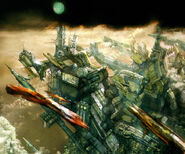 Early concept art of a city in the sky.

Concept artwork of the society of Paddra.

Artwork of the sky above Pulse.

Artwork of a Pulsian mountain. 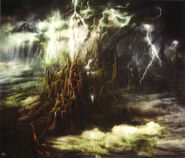 Artwork of a Pulsian mountain.

Artwork of Pulse with a crystal Cocoon. 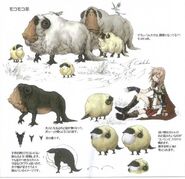 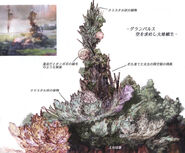 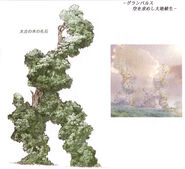 The party's arrival to Gran Pulse.

[view · edit · purge]Gran is a Spanish adjective term for "grand" or "great".

When the party arrives in Gran Pulse in Final Fantasy XIII, a locale introduction screen displays "Gran Pulse" with a subtitle Terra Incognita. [view · edit · purge]Terra Incognita is Latin for "The Land of Unknown". The term Terra Incognita is also a term for a southern landmass on ancient world maps roughly located where Australia lies.