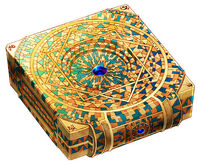 The Gran Grimoire is known as the ultimate codex of sorcery and the Prime Mover, the machinery of life itself. While it was common belief that the Gran Grimoire is a book, the higher echelons of the Iocus priesthood and the Valendia Knights of the Peace knew that Leá Monde the dead city was itself the Gran Grimoire. Ancient Kildean incantations dating to the age of Müllenkamp have been carved deep into the stone walls and floors of the city, which was the wellspring of darkness. Rosencrantz and Romeo Guildenstern yearn for the Gran Grimoire and its powers, which can only be unlocked by the key bearer, the individual that holds the Blood-Sin tattoo, Sydney Losstarot.

The Gran Grimoire is mentioned during the quest The Ultimate Book of Magick, where Luso goes to ask Lezaford about the legendary book. According to Lezaford's notes, anyone who holds the Gran Grimoire has the power to shape the fabric of the world. Not much else is known about it, and its existence has passed into legend.

Retrieved from "https://finalfantasy.fandom.com/wiki/Gran_Grimoire?oldid=580399"
Community content is available under CC-BY-SA unless otherwise noted.