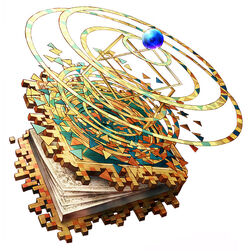 The Gran Grimoire (グラン・グリモア, Guran Gurimoa?) is a powerful source of magic; its powers cannot be easily explained, but he who wields the Gran Grimoire wields some of the greatest magic in Ivalice. In reality, there are many books going by the name of Gran Grimoire, each one holding an incredible amount of power.

The Gran Grimoire is the magic book which transforms the town of St. Ivalice into the world of Ivalice. The world it creates is centered around Mewt Randell's desires: he becomes Prince, his father Cid becomes Judgemaster, and the book creates an entity known as the Li-Grim to replace his dead mother Remedi. The Gran Grimoire's spell is reversed when Marche Radiuju defeats all five of the totema and the Li-Grim, thus causing the world to revert to normal.

The Gran Grimoire is mentioned during the quest The Ultimate Book of Magick, where Luso Clemens goes to ask Lezaford about the legendary book. According to Lezaford's notes, anyone who holds the Gran Grimoire has the power to shape the fabric of the world. Not much else is known about it, and its existence has passed into legend. The Grimoire of the Rift may also be the Gran Grimoire, as Mewt's possession of it explains how such a book would be in a school library.

The Gran Grimoire is known as the ultimate codex of sorcery and the Prime Mover, the machinery of life itself. While it was common belief that the Gran Grimoire is a book, the higher echelons of the Iocus priesthood and the Valendia Knights of the Peace knew that Leá Monde, the dead city, was itself the Gran Grimoire. Ancient Kildean incantations dating to the age of Müllenkamp have been carved deep into the stone walls and floors of the city, which was the wellspring of the Dark. Rosencrantz and Romeo Guildenstern yearn for the Gran Grimoire and its powers, which can only be unlocked by the key bearer, the individual that holds the Blood-Sin tattoo, Sydney Losstarot.

The Grand Grimoire is a black magic grimoire that claims to date to 1522.

Retrieved from "https://finalfantasy.fandom.com/wiki/Gran_Grimoire?oldid=1924069"
Community content is available under CC-BY-SA unless otherwise noted.