Final Fantasy Wiki
Register
Don't have an account?
Sign In
Advertisement
in: Characters in Final Fantasy XII, Hume in Ivalice

A convenient thing, justice. And so I must now make a choice... between my throne, and my son.

Emperor Gramis Gana Solidor is a character from Final Fantasy XII and is the father of Vayne Carudas Solidor and Larsa Ferrinas Solidor. At the age of 63, he is the eleventh Emperor of Archadia and the fourth from House Solidor.

Gramis is an elderly man who wears a long indigo robe with a tall collar and holds a staff. He has white hair and beard and brown eyes and wears a golden headdress with tassels hanging down and elaborate golden half-circle ornaments on the sides and a filigree "peak" at the top of his forehead. His staff has the seal of House Solidor at its tip.

Gramis is a ruthless ruler who wants to secure both his and his family's position within the Empire, as well as the position of Archadia within Ivalice. He feels the pressure of the Imperial Senate and wants his heir to likewise be a strong ruler to carry on the legacy of House Solidor, even coming to callous ways to sort out the succession. He may be growing more paranoid in his older years, fearing the scheming of both the Senate as well as his sons, well aware of his ailing health and thus weakening position. Seeing his sons Vayne and Larsa take after contrasting ideals, Vayne pushing for ruthless takeovers whereas Larsa believes in the powers of peace and cooperation between nations, Gramis has come to reflect on his own rule and to regret some of his past actions.

The man responsible for Archadia's movement into Nabradia and Dalmasca, Gramis has led Archadia with the same ruthlessness as those who came before him, with the help of his third son, Vayne. It was Gramis who ordered Vayne to kill his older brothers, possibly because they were scheming behind his back. Gramis has at times been forced into action by the Imperial Senate, having lost power and control over them.

By the end of his rule, a sickly Gramis seems to regret his past violent interferences in the Kingdoms of Nabradia and Dalmasca, his greatest regret allowing war to cause rifts in his family. Still, Gramis assigns Judge Gabranth to oversee Vayne's actions, and report directly back to him.

The Senate forces Gramis to choose between his two remaining sons, the ruthless Vayne or the innocent Larsa, to take over as the new Emperor. Vayne tells his father the present Archadia has been built on military might with House Solidor at the forefront for generations, and not on negotiation and peace, which is what rule under the liberal-minded Larsa would be like. Vayne believes might and ruthlessness are necessary evils needed to preserve the power of House Solidor from elements that might seek to usurp their hold of the throne; specifically referring to the Imperial Senate. Gramis, while acknowledging this, does not respond further.

Gramis is murdered and with none to compete for the throne except for young Larsa, Vayne declares himself "temporary" autocrat until matters could be settled officially. He blames the Head of the Senate, Chairman Gregoroth, for conspiring with the rest of the Imperial Senate in the poisoning of the Emperor. The Senate is disbanded and Vayne holds absolute control, hence succeeding in ensuring the longevity of House Solidor.

He is voiced by Roger L. Jackson in the English version, who also voiced Wen Kinoc in Final Fantasy X. 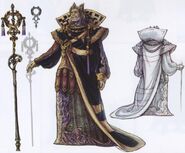 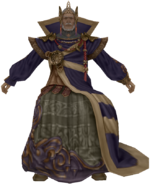 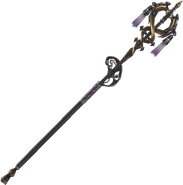