Gradual Petrify progresses to Petrify over time, or after any attack that successfully inflicts any Gradual Petrify effect three times. Higher Stamina or high maximum HP (for monsters only) slows down the timer's progression. Slow also delays worsening, while Haste quickens it.

The Gradual Petrify status returns as a status effect and functions the same way as its predecessor.

Slow-numb causes characters with this condition to become petrified after 30 seconds. In Battle Square battles, Slow-numb carries to the next battle if the character gets inflicted.

Characters afflicted with Petrifying will become petrified when the counter above their heads reaches 0, after roughly 13.3 seconds.

Gradual Petrify starts a countdown meter of 10 to appear above the unit's head. When the meter reaches zero, the unit is petrified. Gradual Petrify can be healed by the Soft and Remedy items, Stona, and Esuna spell, or it can be prevented altogether by equipping the Jelly support ability.

If Zidane is affected by Gradual Petrify, and the player uses Flee the moment he is going to die from it, he'll still use the ability even though he is petrified, sending the other members to safety.

Gradual Petrification is an effect of the "Calcifying Mist" ability used by Notorious Monster Peistes in the Wings of the Goddess expansion. Afflicted players have their movement speed slowed down during the countdown until fully petrified.

The character is turned to stone and will be unable to move or act once the count reaches 0. Remove with a Gold Needle.

Petrify slowly turns a character to Stone, represented by a counter starting at 10 that ticks down every ~4.5 seconds. As the timer runs down, the physical damage both received and dealt by the afflicted unit gradually decreases in increments of 10%, rendering them almost immune to such attacks when the countdown reaches 1. Petrify can be cured with Esuna, but once the timer runs out and the character turns to Stone, they can only be cured by Stona or a Gold Needle.

The player can inflict Petrify via the Break spell, requiring the Time Magick 3 license, costing the player 30 LP, or with the Ancient Sword or the Stone Shot. Fuzzy Miter and Ribbon protect against the status.

Doom and Petrify normally cannot co-exist on the same target; having one status confers immunity to the other. The only exception is when using a Remedy with Nihopalaoa, which inflicts both statuses simultaneously. Because Petrify ticks down quicker than Doom, it will take effect sooner.

The Petrify status can be exploited to trigger the dead character glitch.

Zalera's and Gilgamesh's ability, Level 4 Break, can inflict Petrify if the target's level is a multiple of 4. 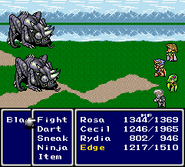 Calca under Gradual Petrify in Final Fantasy IV: The After Years (iOS/Android). 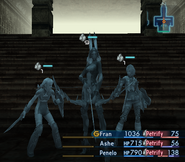 This gallery is incomplete and requires Final Fantasy XI and Slow Petrify in Final Fantasy Dimensions added. You can help the Final Fantasy Wiki by uploading images.
Statuses
Community content is available under CC-BY-SA unless otherwise noted.
Advertisement