Hailing from the Far Eastern land of Doma, Gosetsu has long served Doma and her sovereign, and fought valiantly to defend them from the Garlean Empire twenty-five years ago. Though Doma fell in the end, the samurai has since labored tirelessly to see her rebuilt. Renowned as a peerless warrior, this loyal retainer dreams of a day when the shadow of Garlemald no longer darkens his homeland.

Gosetsu Daito, also known as Gosetsu Everfall, is a non-player character from Final Fantasy XIV. He is a samurai from Doma. Renowned as a peerless warrior, this loyal retainer dreams of a day when the shadow of the Garlean Empire no longer darkens his homeland.

Gosetsu sails into Vesper Bay on a tiny boat after the events of Baelsar's Wall. Striding up to the first individual he can question, he sets out to find Yugiri Mistwalker—whom he knew to be somewhere in Eorzea—before falling unconscious from starvation. He is taken in by Urianger Augurelt who feeds him and directs him to Mor Dhona. Once he arrives in the Rising Stones, Gosetsu requests that Yugiri return to Doma, as her services are needed to help assist their mutual master. In the face of Yugiri's refusal (citing the hospitality granted by the Eorzean Alliance) and Nero tol Scaeva's mention of Garlemald's intent to take Omega, Gosetsu agrees to assist the party, stating that he is oathbound to fall upon the empire wheresoever they march.

Upon arriving in Carteneau the Warrior of Light and the rest of their party are set upon by an imperial squadron. With Gosetsu leading the charge the Warrior's party is victorious and they activate Omega and repel Shinryu. Gosetsu and Yugiri lament the dire state of the war against the empire. Rallying their spirits, they turn their eyes eastward in the coming fight to liberate their home.

Warrior of Light and the Scions travel to Othard and meet with Gosetsu. The group witnesses Yotsuyu, a Doma traitor, abusing villagers, and Gosetsu intervene only to end up as a prisoner and tortured by Yotsuyu and Grynewaht pyr Arvina. Later he and the other hostages are rescued by Confederacy. Joining the group again Gosetsu leads the Scions to Namai, but the civilians fear the empire and do not receive him as expected.

At the House of the Fierce they meet with Yugiri who reports she has completed her mission to find Lord Hien, but he refuses to return to lead his people against the empire. Later, when Zenos yae Galvus arrives in an imperial airship, Yugiri proposes to seize the opportunity to assassinate him. Gosetsu opposes it as this would only worsen the plight of his people. Yugiri ignores the warning and Gosetsu appears to rescue her.

Gosetsu, Yugiri, Lyse Hext and the Warrior of Light make their way to Azim Steppe in search of Lord Hien. With the help of Cirina Mol, Hien's friend, the group meets him and Yugiri reports on recent events. Hien decides to return to Yanxia, but before that he intends to help the Mol Tribe triumph in the Naadam and get the help of the people of Azim Steppe to free their homeland. Gosetsu, Hien, Lyse and the Warrior of Light complete the trial to be recognized as warriors of the Steppe and are taken into Magnai's custody until they pay a tribute. Upon returning to the Mol Tribe, Gosetsu and the party help Cirina to triumph in the Naadam.

Once preparations are complete Gosetsu participates in Doma's resumption alongside Hien, Yugiri and the Warrior of Light. In the aftermath of the battle for Doma Castle, Gosetsu saves the party by catching a collapsing ceiling as the castle crumbles. While initially confident he can escape the wreckage, he is shot twice in the side by the trapped Yotsuyu, dashing his hopes. The injury prevents Gosetsu from escaping as the castle collapses completely. Soroban posits that he may have washed out to sea with the wreckage and attempts to find him, but is unsuccessful and Gosetsu is presumed dead.

Both Gosetsu and Yotsuyu survived, having indeed been swept out to sea where they washed up on a desert island. Gosetsu finds that Yotsuyu lost all her memories, reverting to a childlike mindset; recognizing the innocence of her current state, he begins looking after her and calling her "Tsuyu." Eventually, Gosetsu builds a raft to sail them both back to Kugane. Gosetsu attempts to find passage across the Ruby Sea to Doma to reunite with Hien, though he remains concerned for Tsuyu due to her new mindset and how many of his fellow Domans would bear a grudge against her for her past actions.

Gosetsu, still bedridden and hospitalized by Tsuyu, claims to be healthier and would be back in fighting condition soon. After wanting to taste the persimmon fruit of Namai, his favorite food when he was a child, Tsuyu runs off on her own to the village to search for it. After the death of Tsuyu, Gosetsu mourns for her, asking why the kami let them survive only to inflict this tragedy. Gosetsu decides to become a wandering monk, going on a journey to help the people of Doma.

Gosetsu returned to aid Hien, Yugiri, and the Warrior of Light as they hunted down the Blasphemy, Izanami, in the Far East.[1] He revealed that during his pilgrimage, he had discovered the benefits of ascetic training, called shugendo. Having discarded his blade and Samurai discipline, he now used a Shugenja's staff in combat, and opted to aid the party with restorative magicks.

Following the vanquishing of Izanami, Gosetsu returned to his journeys as a wandering monk, seeking further practice in his new role, but promised to return whenever Hien needed him.

As a Roegadyn, Gosetsu carries the traditionally massive stature and musculature of his kind, though as an Othardian Roegadyn, his pale skin and lack of a flattened nose differentiate him from his Sea Wolf or Hellsguard brethren. His hair, mustache and beard are silver and immaculately trimmed. Gosetsu dresses in the traditional garb of a Doman samurai and his katana is well-ornamented.

Following the death of Yotsuyu goe Brutus, Gosetsu shaves his head as a sign of renouncing his fealty to Lord Hien to live out his days on a pilgrimage offering prayers for the fallen.

Following this, he leaves his sword Samonji behind, and wields a Suzaku cane in battle.
Spoilers end here.

Gosetsu is boisterous in his words and actions. Alisaie once commented that his voice was so striking it could "fell a gigas". Gosetsu carries wisdom that he shares to those who feel lost, becoming a welcomed adviser to his young lord, Hien.

Gosetsu is proud of his nation to the point of refusing to acknowledge starvation in the face of imminent duty to his homeland. Behind this steadfast duty and loyalty to his nation, Gosetsu feels guilty for the failed previous rebellion that killed Lord Kaien.

When the prospect of fighting for his nation is brought up, or simply fighting the Garlean Empire, hesitation turns into joyous agreement. Gosetsu is confident in his combat abilities, standing directly in front of the Warrior of Light when faced against a squadron of Garlean soldiers. Gosetsu is loyal to his friends, lord and comrades, willing to sacrifice himself to ensure their safety.

During combat in Stormblood, Gosetsu fights as a Samurai, using many of the jobs abilities.

Making a sudden reappearance in Endwalker, Gosetsu assists his comrades as a Shugenja, which uses many White Mage abilities. In combat he will use Kattansho (Cure), Yomeisho (Cure III), Fugekisho (Aero III), Meikyusho (Cure II), Gangekisho (Stone II), and Ascetic ward, which grants a defensive buff to allies who are within the circle. 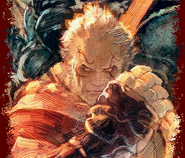 Gosetsu in Under the Moonlight artwork.

Gosetsu and Yugiri in a Stormblood FMV.