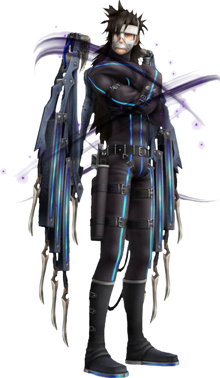 Gorgonero, known in Japan as ネロ・ウィングシューター (Nero Uingu Shuutaa?, lit. Nero Wing Shooter), is a relatively easy boss in Chapter 11 of Dirge of Cerberus -Final Fantasy VII-, directly following the battle with Arachnero. This boss fight is very similar to the battle with regular Nero, mainly because Gorgonero retains the same attacks. The difference in this case is that Gorgonero will teleport between six set locations on the battlefield.

When his purple aura appears, the player need only aim at that spot with any gun and then fire at Gorgonero for heavy damage. Should Gorgonero appear next to the player, it is wise to use the Machine gun and start firing even just before he appears, or he will deal not too much, but a nasty amount of damage with his wing-spin melee combo. Melee attacks work as well, but you must be quick.

Retrieved from "https://finalfantasy.fandom.com/wiki/Gorgonero?oldid=3210920"
Community content is available under CC-BY-SA unless otherwise noted.