The Gorgon is an enemy from Final Fantasy IV. She is only encountered in a small area, south of the Sylph Cave. She is not a dangerous enemy, though she can inflict Gradual Petrify with her Stone Touch ability. Bringing some Gold Needles along is not a bad idea in case someone is turned to stone.

Gorgon can only be found on a three tile peninsula in the Underworld, this remote area can be found directly south of the Sylph Cave. 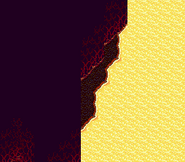 The three tiles.
Add a photo to this gallery

[view · edit · purge]In Greek mythology, the Gorgon was a terrifying female creature who had hair of living, venomous snakes, and a horrifying visage that turned those who beheld it to stone, the most famous being Medusa.

Retrieved from "https://finalfantasy.fandom.com/wiki/Gorgon_(Final_Fantasy_IV_3D)?oldid=3182074"
Community content is available under CC-BY-SA unless otherwise noted.