English localizations avoided use of "Gorgimera", and the name "Rhyos" coined in Final Fantasy VI on SNES became the standard localization until Final Fantasy XI (where enemy names use Latin-text in both Japanese and English versions) introduced its Gorgimera. This occurred following Dawn of Souls but before the other Advance retranslations, hence the inconsistency.

Rhyos is an enemy fought at the second floor of the Chaos Shrine in the past. It attacks with Blaze and Stone Gas, making it a dangerous foe to a party without Petrification protection. It resists Fire-elemental damage and is weak to Ice-elemental damage. Upon defeat, it may drop a Power Staff.

Rhyos is an enemy fought at Fynn Castle and Cave of Mysidia. It is a highly dangerous foe as not only does it have access to Blaze VII, but access to Bad Breath VI which can inflict Petrify to the party. While it is stronger than the Chimera, it is weaker than the Chimera Sphinx and Chimera Brain.

Gorgimera is an enemy fought at the final dungeon, Interdimensional Rift, in the last floors. It fights using various group elemental attacks as well as a moderately powerful physical attack. It has Aegis Shield as a rare steal and can drop the Circlet upon defeat. It is weak to water-elemental attacks and is vulnerable to all statuses but mini and toad.

Gorgimera is a very rare enemy fought at the Cave on the Veldt. It fights using a regular attack, Rampage, and a wide array of elemental attacks, such as Snowstorm, Fireball, Gigavolt, Magnitude 8, and Aqua Breath. It has the Golden Spear as a rare steal, and can be turned into an Ice Shield as a rare Metamorph.

It can also be fought in the Dragon's Neck Coliseum through betting the Dragon Horn (to win a Gold Hairpin), Hero's Ring (to win a Guard Bracelet), Masamune (to win a Murakumo), Red Cap (to win a Hypno Crown), Reed Cloak (to win a Tortoise Shield), and Wing Edge (to win a Sniper).

Rhyos is an enemy fought during chapters 3 and 5 at Thunder Plains, Lake Macalania, Cavern of the Stolen Fayth, Floating Ruins, and floors 41-43 at Via Infinito. It is a moderately powerful foe, having a strong physical attack, Thundaga, Chaos Flame, and Aqua Breath. When in Oversoul, it also gains access to Berserk and Brute Force, making it even more powerful and dangerous. It may also be bribed in order to get the rare Tetra Gloves. 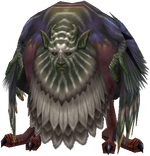 Gorgimera is an enemy fought at Zertinan Caverns at Hourglass Basin, The Balamka Fault, Drybeam Cavern, and Darkened Wharf, while level 38-39 versions are fought at the Sochen Cave Palace at Doubt Abandoned and Mirror of the Soul. They are moderately dangerous, having access to the ability Stone Gaze, as well as Purify and Ember Breath. Gorgimeras are weak to Wind-elemental attacks.

The Gorgimera is the boss of the FATE "Go, Go, Gorgimera," found in the Raubahn's Push area of Northern Thanalan just outside Castrum Meridianum. Receiving a gold rating in the FATE grants the achievement "When the Going Gets Tough" and the Infant Imp minion.

[view · edit · purge]Gorgimera is a chimera variant from Dungeons & Dragons, with the head and hindquarters of a gorgon instead of a goat. Its gorgon head can turn opponents to stone with its breath.