The younger prince of Kashuan. Long haunted by his abandonment of his realm and older brother, whom he left to die at the Empire's hands, he eventually gained the courage to fight and take on the mantle of his royal birth.

Gordon is a recruitable character in Final Fantasy Record Keeper. He is unlocked in Dreadnought on Classic in the storyline of Final Fantasy II as the First Time Reward. He has also appeared in the Seer of Destiny Challenge Event.

Gordon's story role is as Kashuan Prince. His combat role is Physical Support.

Gordon doesn't dazzle with impressive stats across the board and in spite of a broad equipment draw, he develops very slowly. Given his talents, he is a better Red Mage than the Core Red Mage, and may well earn his place in the party by aiding his allies with boosts and buffs few others can provide.

His default Soul Break is Hidden Potential which at the expense of one Soul Gauge segment raises user's Attack, Defense, Magic, and Resistance. The shield Flame Shield (II) grants Gordon access to Goddess's Bell, which for one Soul Gauge segment deals three ranged physical attacks to all targets and lowers their Attack and Magic stats. 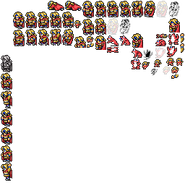 Icon for Means of Survival (生き残りの意地).