Moogles originated in the Churning Mists and were loyal servants of the gods. Due to a war, the moogle king led his subjects to the realm of mortals in secret to live a life of peace. The moogles found the distance to the land below too great for their wings, and thus the journey would be made by rope, the longest ever woven. The king grasped onto one end of this lifeline as his subjects, one after the next, half clambered, half slid their way to the Promised Land, except for Good King Moggle Mog XII who had not the means to lower himself. Mourning their lost king and touched by his sacrifice, the moogles have since abstained from naming a successor and revere his name—though, in truth, some moogles remained in the Churning Mists while the ones that escaped made their home in Gridania.

Ages later, at the dusk of the Sixth Astral Era and again during the Seventh Umbral, the Mooglesguard of the Twelveswood, the sworn defenders of mooglekind, grow worried about the threats to the forest and feel compelled to bring Moggle Mog to Eorzea via a ritual taught to them by the kind masked stranger who approached them. Many note, however, that this shouldn't be possible as Moggle Mog is believed to be a legend. What the Mooglesguard had summoned is revealed to be their desire for Moggle Mog to be real given physical form.

While moogle legends describe Moggle Mog as a kind, benevolent presence, the primal summoned by Mooglesguard is driven by the need to feast on ever-greater amounts of aether along with a large following to further solidify his being. Thus the adventurer and company defeat Moogle Mog on two separate occasions before he does irreparable damage, not just to the other citizens of the Twelveswood, but to the moogles themselves.

Rather than recognizing their folly in summoning the king, the Mooglesguard are filled with anger and summon him forth once more. More powerful than his previous incarnation, it assumes the title of Great King Moggle Mog XII. Despite his increase in power, the adventurer defeats both the King and the Mooglesguard yet again.

Good King Moggle Mog XII is fought as a boss during which he is aided by a zealous band of moogle warriors.

Good King Moggle Mog XII's eponymous theme plays during the battle against him. It is a remix of the traditional Moogle Theme, albeit more spooky in nature. It resembles "This Is Halloween", the opening theme to The Nightmare Before Christmas, written by Danny Elfman.

Long believed to be a myth, this moogle king has now descended to Eorzea. 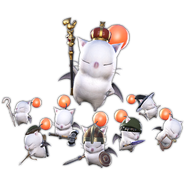