Detects by Sound
List of Goobbue Enemies
Goobbues are large, bipedal monsters defy description. With their very short legs, they tend to move rather slowly, but their abnormally long arms allow for a reach envied by monks across Vana'diel. While they often appear to be peacefully standing and guarding their surroundings, when provoked, they can attack with considerable strength.

Indeed, a look inside their mouth at what must be hundreds of shark-like teeth reveals their true intent―to consume sufficient quantities of nourishment to sustain their massive bulk. An angered Goobbue can attack with not only highly damaging direct physical damage, but can also excrete a mist which both reeks and wrecks havoc with mages. If that were not enough, those daring enough to look a Goobbue in the eyes may find themselves temporarily paralyzed with fear.

Rewards for defeating a Goobbue can be lucrative. Tree Cuttings, which can be hard to come by elsewhere in Vana'diel are highly prized by Gardeners everywhere, and Boyahda Moss is in a constant state of demand by Selbina resident Melyon. 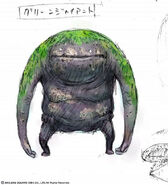 This ponderous plantoid has terrible eating habits, devouring without distinction. The vegetation growing on its back makes it a valuable target, but this monster has also been spotted helping farmers in the field.

A Goobbue appears as an enemy in Battle Music Sequences (BMS). 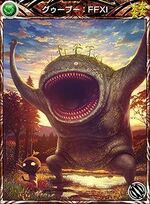 This section in Mobius Final Fantasy is empty or needs to be expanded. You can help the Final Fantasy Wiki by expanding it.
Final Fantasy XI enemies
Community content is available under CC-BY-SA unless otherwise noted.
Advertisement