Gongaga is an optional field map in Final Fantasy VII. It can be visited at any point in the game, and visiting it before Meteor is summoned allows the player to partake in "Gongaga, the Village of Sadness", in which a brief boss battle is fought and some unique dialogue takes place. Gongaga is a worthwhile visit due to some useful items that can be obtained.

Gongaga is located to the south on the planet's western continent. In Final Fantasy VII Gongaga is the only major location that is not marked on the world map with a dot.

Upon entering the Gongaga area from the world map, the jungle is the first area visited. During "Gongaga, the Village of Sadness", this is where Turks:Reno and Turks:Rude are initially fought. Following this, a number of random encounters are fought.

The jungle has a forking path between its two divided screens. The fork on the right leads to the Reactor Wasteland area. The fork on the left leads to the village path, which itself has another fork north and south; the south fork leads back out to the world map and has a Deathblow Materia on the ground, while the fork north leads up to the village.

The Reactor Wasteland is a barren land between the jungle and the ruins of the reactor (named "Meltdown Reactor"). The same Heavy Tank enemy can be encountered here as in the Meltdown Reactor area; this enemy can be morphed into Power Sources once the Morph Materia is available.

Comprising the scrapyard around the ruins of a mako reactor, the Meltdown Reactor has a short scene with Scarlet and Tseng upon arrival during "Gongaga, the Village of Sadness". The ruins has a path that forks left and right, but neither path leads anywhere; halfway along the right path, the Titan Materia can be found by inspecting the building.

The Heavy Tank enemy appears in this area as a random encounter.

The village of Gongaga has a graveyard near the front and five buildings: the Weapon Store on the left, the Inn on the top-left, the Mayor's Home on the top-right, the Item Store on the right, and the residence of Zack's parents on the bottom-right. The Weapon Store has two floors, where the bottom floor sells accessories, and the top floor sells weapons. Entering the home of Zack's parents will trigger unique dialogue if Tifa and/or Aeris are in the party for "Gongaga, the Village of Sadness".

After the events at the Temple of the Ancients, Cloud will awake in the Gongaga Inn. 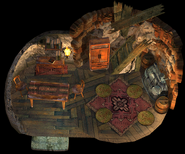 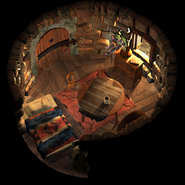 The party can come to Gongaga as soon as they get the buggy from the Gold Saucer. If the party arrive before obtaining the Keystone, they will begin the optional chapter "Gongaga, the Village of Sadness".

Upon entering for this chapter, the Turks will be lying in wait and a boss battle will ensue against Turks:Reno and Turks:Rude. After the battle the party suspects a spy, but Cloud says he trusts everyone.

The north exit leads to the reactor. Approaching the reactor will trigger a cutscene showing Scarlet and Tseng searching for "Huge Materia", but they are out of luck. Just down and left of where the party hides is a regular Materia, Titan. At this point in the game it's invisible, although it becomes visible after the party obtains an airship if it hasn't been picked up by that point.

The west exit leads to another field with the Deathblow Materia. This and the Titan Materia do not become unavailable when the aforementioned events do.

The party is automatically taken to Gongaga after the events in the Temple of the Ancients, and this is the only mandatory visit to the town. There are no events in Gongaga at this time bar the initial dialogue at the inn, however.

If Aeris and Tifa are in the player's party during the first visit to Gongaga, they will walk out once the player enters Zack's parents' house. Talking to them afterwards earns the player affection points toward them that count toward determining Cloud's date at Gold Saucer, and a scene with Tifa at the end of disc 2. Ignoring them reduces the points.

The Touch Me enemies teach the Frog Song E.Skill. The Heavy Tank morphs into Power Sources and is thus valuable for any min-maxing efforts.

There is a dummied scene in the Reactor Wasteland that could take place before the events at the Temple of the Ancients, after talking to villagers, after observing the reactor, and if Barret were in the party, and the scene had not already been seen (to prevent repeats). Due to a programming error the flag for whether this scene has been viewed is set automatically in the Sector 5 slums church during story events, so this scene cannot be viewed in a normal playthrough. In the scene Barret speaks about Shinra doing things for money and using its power to control people, which is why he formed AVALANCHE. Barret asks Cloud if he still plans to fight with them, and Cloud's answers would have affected Barret's date mechanics point value.

Originally Final Fantasy VII was going to contain a traveling salesman as part of a sidequest, who would appear in Gongaga. The salesman would give two key items to the player, one titled "Letter to a Daughter", and another, "Letter to a Wife". While cut from the final version, the script for the character was still written and translated and exists in the game's data. The salesman also says, "I came because I heard near this village was Materia strong enough to shake the earth", which would supply the player with knowledge of the Titan Materia's existence, and likely the reason the Materia was moved from Kalm.

The traveling salesman also has some unused lines in Rocket Town, but only in the Japanese game.

A developer who worked in the Final Fantasy VII project at Squaresoft has said that the traveling salesman's Gongaga lines were created to inform the player of the Materia in the ruins of the reactor, and the reason it wasn't used was because the staff only had five months to implement the data in the game. This wasn't enough time to link it to the event it connected to, so it was cut.[1]