Gongaga is a foothill town in Final Fantasy VII and Crisis Core -Final Fantasy VII-, mentioned in Before Crisis -Final Fantasy VII-. It is located in a jungle south of Gold Saucer on the western continent of Gaia, and is the home of the First Class SOLDIER Zack Fair. Due to a disaster, the town has been badly damaged. As a visitor enters the surrounding jungle, they will see a fork in the road; the left path leads to the town, and the right leads to the burned-out mako reactor.

Gongaga was the hometown of Zack Fair and Katana (Male). The village was home to one of the Shinra Electric Power Company's mako reactors. At some point, an explosion at the reactor killed most of the villagers, the survivors voting to outlaw the use of mako energy in the village and live with nature.[1]

After Zack and Cloud Strife escaped Nibelheim from their four-year imprisonment, they picked up a motorcycle from Cissnei. Taking random highways throughout the continent, trying to avoid the Turks, the Shinra army, and the Genesis Copies who pursued them, Zack stumbled upon his hometown, most of which had been destroyed by the mako reactor explosion.[2]

Despite realizing the likelihood of a trap, Zack entered the town out of concern for his parents, leaving Cloud in the motorcycle on the reactor outskirts. Cissnei intercepted Zack, as the Turks had sent her to Gongaga to wait for him. She let him go, but Zack did not, seeing an image of the late Angeal Hewley. Following this image, Zack encountered Genesis and Hollander, who attempted to kidnap Cloud as they had deemed Zack's cells worthless for their pursuit of finding a cure for degradation. Zack battled and killed Hollander, then chased off Genesis before either were able to harm Cloud. The image of "Angeal" was revealed to be Lazard, an Angeal Copy, who was protecting them from Genesis and Hollander.[2]

During "Gongaga, the Village of Sadness", Cloud's group arrived at the village outskirts and encountered the Turks, Reno and Rude. As there was no hint of anyone following them to tip off the Turks to their arrival, they believed there must be a traitor among them. Cloud refused to believe in a spy, trusting everyone. Cait Sith attempted to divert attention from himself, hoping that Cloud would not blame him just because he was the new member.[3]

At the reactor grounds the party eavesdropped on a conversation between Scarlet and Tseng from Shinra, who were there looking for Huge Materia Their quest unsuccessful, Scarlet deemed the reactor faulty to begin with and thus useless for their purposes. Cloud's party went into town visited Zack's house and met his parents. Aerith Gainsborough revealed to them that Zack was her first boyfriend, and lamented he was a "ladies' man" who must have found someone else. Tifa Lockhart, meanwhile, denied ever knowing Zack when Cloud confronted her about acting strangely upon hearing a mention of him. She only compared Zack's attitude to Cloud when he left to join SOLDIER, telling him she was proud.[3]

After coming under Sephiroth's influence in the Temple of the Ancients, Cloud relinquished the Black Materia to his nemesis before his party members knocked him out for going out of control and attacking Aerith. Following this, in "Parting with Aeris", Cloud awoke at the Gongaga Inn with Tifa and Barret by his bedside, informing him that Aerith had disappeared. Aerith had told Cloud in a dream that she was going off alone to stop Sephiroth to protect Cloud from his influence, and so Cloud was not surprised to learn that she had left. When he told the others this, they urged him to go after her, as Aerith would be no match to Sephiroth alone. Cloud was unsure, disturbed by how Sephiroth had been able to control his actions, but the others brushed his worries aside and they left.[4]

Gongaga is located to the south on the western continent, directly south of the Gold Saucer. It is a foothill village located within a thick jungle, and comprises mostly small huts resembling tents. A visible graveyard nearby presumably exists in honor of those who died in the explosion, and some villagers mention that pieces of the reactor can still be found within the village.[1]

In the jungle surrounding Gongaga has a path through the trees, leading both to the town itself, as well as to a wasteland containing the remains of the mako reactor. The wasteland is barren with a wide space separating it from the jungle, and in its center are large piles of burning scrap that were never cleaned up following the reactor's explosion.

The mako reactor explosion killed most of the villagers, and the survivors voted to live without mako energy. They harbor great resentment for Shinra as a result. The villagers have a bleak outlook on life following the reactor's explosion, lamenting their lost loved ones in the explosion.[1] Many people who still live in the village are older people.

Gongaga is an optional location. It can first be visited after "The Desert Prison" when the player has the buggy. Visiting it before "Secret Date" begins the optional chapter "Gongaga, the Village of Sadness". During this chapter, a short boss battle commences, unique dialogue plays, and some rare items—including the Titan Materia and Deathblow—can be obtained. This also provides opportunity to speak to Tifa and Aeris, boosting their date mechanics scores. If their current score with Cloud is high, they will also have unique dialogue.[3]

The party is returned to Gongaga automatically after the events at "Within the Temple of the Ancients". If the player picked up the Morph Materia at the temple, they can now use it to morph the Heavy Tanks outside the reactor for Power Sources.

The village path leads farther, going into some houses on the outskirts, and eventually to a mountain-side path that ends in a cliff overlooking the village. The village and the remains of the reactor are all visible from the cliff. Zack visits the jungle near Gongaga near the end of the game, before heading to the final dungeon, and has a boss battle here against Hollander. Gongaga Trading shops can also be opened on the menu during Mission 2-3-1.

Final Fantasy VII has a dummied scene in the reactor wasteland that would have taken place during "Gongaga, the Village of Sadness", if Barret was in the party. In the scene, Barret reminisces forming Avalanche to fight back at Shinra for using its money and power to control people, and asks if Cloud plans to fight with them still. Cloud's answers would have affected Barret's date mechanics score. However, due to a programming error, the flag for whether the scene has been viewed is set automatically in the Sector 5 slums church during story events, so this scene cannot be viewed in a normal playthrough.

There is a deleted sidequest in Final Fantasy VII that would have started in Gongaga, involving a traveling salesman. The salesman would give two key items to the player, one titled "Letter to a Daughter", and another, "Letter to a Wife". While cut from the final version, the script for the character was still written and translated and exists in the game's data. The lines were created to inform the player of the Titan Materia, and were removed because the staff had only five months to implement it.[5] 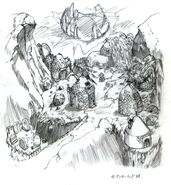 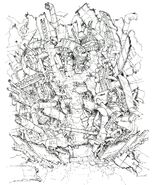 Gongaga in the distance.

The abandoned mako reactor in Gongaga.