Goliath is a Rank VI Mark from Final Fantasy XII. The hunt can be undertaken after the storyline events in Draklor Laboratory are complete. The Goliath can be found in the Hall of Slumbering Might area of the Necrohol of Nabudis. Goliath is part of the Jovy side quest in Nalbina Fortress.

A magickal Fiend of great Size, appearing Sometime after the Destruction of Nabudis. The Manner of its Fashioning and the Source of its Power are both Mysteries, its apparent Materials and Accoutrements being wholly different from other such Constructs. Of late, Interest in this Fiend has spread beyond the usual scholarly Crowd, leading Barrong, an aspiring Author of Bestiaries to post a Bill for this Mark.

To find Goliath, the player should enter the Necrohol of Nabudis from the Nabreus Deadlands.

Goliath will erect a Magick Barrier negating all magick attacks against it. Like all Automaton-enemies, Goliath can cast Graviga, which shaves away about half of the characters' HP. Goliath mostly relies on its Graviga magick, as well as other types of magicks, but it can dish out moderate damage with physical attacks.

In HP Critical it becomes stronger and faster.

Crowd control plays an important role. The moment Goliath appears, one should cast Dispel on it as it will soon erect a Magick Barrier, after which it can no longer be dispelled.

The party should dispose of the Baknamy quickly via Warp Motes (this won't affect Goliath), and focus on attacking Goliath. Unless the party is relying on constant Bubble by equipping Bubble Belts, one should not cast Bubble since this will increase Graviga's damage.

One should aim to finish Goliath quickly when its health hits critical, since it will hit fast and hard.

The easiest tactic is to cast Reflect on the characters, or equip Mirror Mails, to reflect Goliath's magicks back to it and bash it from afar using ranged weapons. For a melee party the player should equip their "tank" with a Bubble Belt and set a gambit for Arise: Ally any and Bravery: "Character's Name". The Technick Expose works well on it. 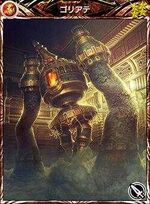 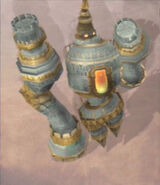 [view · edit · purge]In the Old Testament of the Bible, Goliath was a giant Philistine who was defeated by David.