The site of Saint Ajora's execution, now employed as a public execution ground by Lionel.

The Golgollada Gallows (ゴルゴラルダ処刑場, Gorugoraruda-shoukeijou?), also known as the Golgorand Execution Site, is a location in Final Fantasy Tactics, the site of Saint Ajora Glabados's execution. It is located south of Lionel Castle and is employed as a public execution ground by the province.

Due to the lack of a Guest for the first time, many hard-to-reach Archers, Gaffgarion's HP-draining attacks, and the hard-to-reach Time Mages who regularly cast powerful status spells, the battle at Golgollada Gallows is considered one of the most difficult in the game by many fans. Fortunately, Gaffgarion and the Knights can be rendered harmless by breaking their swords. The Blood Sword can be stolen from Gaffgarion if it is not broken.

Goffard Gaffgarion sets the first of two traps in which he would attempt to snare Ramza Beoulve at the Golgollanda Gallows. During the ensuing battle, Agrias Oaks learns of Ramza's connection to House Beoulve, and is shocked to learn that the good man that had been helping her was the half-brother of the two men she despised.

Golgollada Gallows appears as the Battle Music Sequence for "Antipyretic". 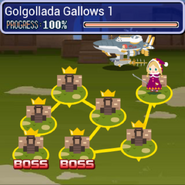 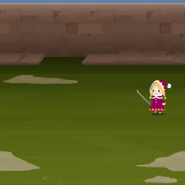 The name "Golgollada" possibly comes from the name of the hill Jesus was crucified on, Golgotha, and is also the site where Saint Ajora was executed, fitting with other Christian symbolism and parallels in Final Fantasy Tactics.