Golem is an esper in Final Fantasy VI who can be acquired as a magicite.

Golem appears machine-like. It is brown, with a bulky, robotic body, and takes a humanoid shape.

After the Returners raided the Magitek Research Facility, Golem's magicite came into possession of the Auction House in Jidoor, and the Returners purchased it.

Golem costs 33 MP to summon, and casts Earthen Wall to shield the party from physical attacks and will absorb damage equal to the HP of the summoner. It will only block attacks capable of being blocked, and can only block attacks that do damage; special attacks that inflict a status ailment without dealing damage will not be blocked. When leveling up, he provides a +2 boost to Stamina.

Golem is useful at most points in the game for providing a strong defense against physical attacks, but it will likely only be able to block a few blows before wearing off. Its defense is comparable to Fenrir, who casts Image on the party; though Image could absorb more hits than Golem's Earthen Wall, there is a 25% chance with each hit absorbed that Image will be removed. 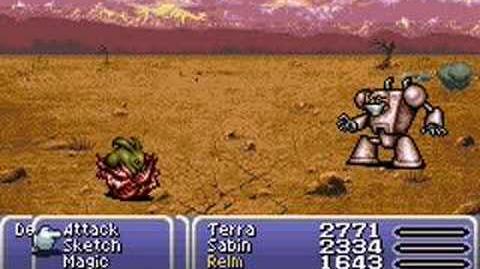