Goldor Manor, also known as Goldor's Mansion, is a location in Final Fantasy III found on the southern tip of the large eastern continent on the Surface World, beyond the bottomless bog. As its name suggests it is the extravagant home of Goldor and is covered from floor to ceiling in gold. The enemies here are gold-themed.

After getting the Levigrass Shoes from Delilah at the Amur Sewers, the Warriors of the Light head towards the Goldor Manor, which they can now access.

At the manor, they meet Goldor at the manor's "crystal room" where they fight him, frightened by the idea of the party stealing his gold. After defeating Goldor, he destroys the Crystal, which astonishes the heroes. It is not the real Earth Crystal, rather, being a gold fake of it made by Doga for Goldor's avidity. The Warriors find the key to the chains that hold the Enterprise, thus returning to Amur to unlock it. After that they are able to fly the skies of the Surface World.

As the waters recede following the death of the Kraken, the party is caught in the collapsing Cave of Tides. They wake in the Inn at Amur, miraculously alive, yet find their airship Enterprise in chains.

The background music that plays at the Goldor Manor is called "The Altar Cave".

Room that leads to secret stairway on first floor (NES). 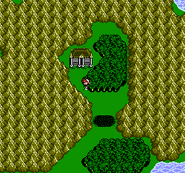 Goldor is a portmanteau of "gold" and the French word or, which also means "gold". [view · edit · purge]Gold is a chemical element with the symbol Au and atomic number 79. It is a dense, soft, malleable and ductile metal with a bright yellow color and luster, the properties of which remain without tarnishing when exposed to air or water.